drinktec is the World´s Number One for the Brewing Industry 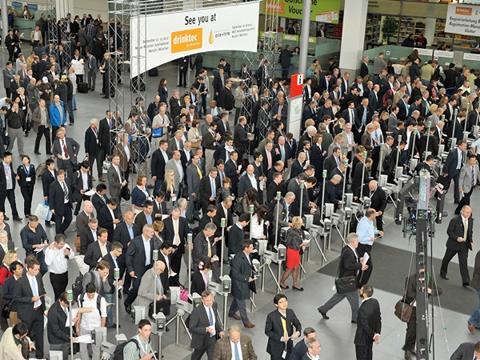 Around 44 percent of the visitors to the last drinktec came from the brewing business. Which shows that drinktec 2017, the “World´s Leading Trade Fair for the Beverage and Liquid Food Industry”, is continuing to be the most important international trade fair for the brewing sector. Between September 11 and 15, 2017, all those involved in the production of beer will be coming together at the Messe München exhibition center: brewers big and small, local and regional producers, craft brewers, micro-brewers and amateur brewers. And here they will find all they need to produce excellent beer.

Currently the global thirst for beer is lessening. For the first time brewers worldwide saw the market fall in two successive years—in 2014 by 0.5 percent and in 2015 by 1.5 percent. The main reasons for this are thought to be the difficult general economic conditions and increasing political unrest. And: The world beer market is now strongly consolidated. According to Statista, the five biggest brewing groups accounted for just over half of all beer sales, a market that stands at 1.93 billion hectoliters. It will become even more important for each individual brewery to be able to produce efficiently and flexibly. For that, they need the right technology, energy-saving brewing processes, plus continuous investment in the business, in line with the motto “A brewery that stops building, will soon stop brewing.”

For the brewing sector drinktec 2017 is offering everything that is needed for producing and marketing beer. Tailor-made solutions can be found here for both amateur brewers and craft brewers, as well as family-owned firms and large-scale breweries. Overall around 80 percent of the drinktec exhibitors are offering solutions and technology for the brewing world. The exhibitors will be showcasing product-specific process technology for beer from the brewhouse via filtration through to the necessary analytical equipment in Hall B2. Raw materials from malthouses and from hop suppliers are presented in Hall B1 and restaurant and catering supplies as well as dispensing systems are on show in Hall A1. There is a new section called Home & Craft in Hall C1, where small-scale and amateur brewers can find the right equipment. drinktec is thus reacting to a trend that is gaining ground in Germany. There are now an estimated 17,000 amateur brewers in Germany, and the borderline between production for home consumption and commercial activity is not a clear one. The adjacent display called drinktec@SIMEI in Halls C1 and C2, where machinery, technology and equipment for wine production and processing is on show, will also be of interest to craft brewers who occasionally like to fill their special beers in fine, large wine bottles or who think more in terms of overall numbers than hectoliters.

Of course in the brewing industry not everything is measured in terms of size. Small and medium-sized breweries are generally well placed to find their niche and to fill it. The ever stronger craft beer wave is advancing across almost all continents. In Europe, Asia and Australia lots of small breweries are starting up. In the US, the “mother land” of the craft brewing movement, the market in craft brewing increased by almost 13 percent (in sales) and 16 percent (in revenue) in 2015, according to the Brewers Association, this against the background of an overall market that was stagnating. These small breweries now account for over 12 percent of the second-largest beer market worldwide. What an amazing success story! Thanks to craft beer, new dynamism is being injected into hop markets worldwide, which have suffered years of standstill. Years ago US-American hop farmers had started to grow new varieties of hop, and craft brewers experimented with different taste nuances. Now other regions are following suit. For example, the Hallertau region in Bavaria is producing new German varieties with highly aromatic nuances.

In the Asia-Pacific Region the market for beer has been very turbulent in recent years. Slightly lower growth, high competitive pressure and the increasing presence of foreign breweries on the one hand, and the increased popularity of craft beer breweries, higher spending power and generally consumption-oriented consumer behavior on the other will continue to influence the market in future: AsiaBriefing is expecting that the beer market in Asia-Pacific in 2020 will reach a volume of 220 billion US dollars, an immense figure. The Chinese beer market has been the biggest in the world since 2002 in terms of production and overall consumption. China has for many years been a very fragmented, heterogeneous market. The golden years with sometimes double-digit growth rates seem for now to be over, following a noticeable tailing off in 2014 and 2015. However: “It´s too early for a swan song,” says Meik Forell from corporate consultants Forell&Tebroke in an analysis of the Chinese beer market.

There are also hopeful signs. Germany´s engineering federation, the VDMA, is predicting annual growth in the entire beverages industry in the Asia-Pacific Region to be 4.6 percent. 2016 was the first year in the 13th Five Year Plan in China. The aim with this plan is to facilitate economic change, encourage consumption and strengthen innovations. The two new concepts of “Industry 4.0” and “Made in China 2025” are providing the basis for new, smart ideas, also for the beverages industry. And the brewing supplies industry will also profit from this. CHINA BREW CHINA BEVERAGE (CBB), International Trade Fair for Brewing and Beverage Technology, is regarded as the most important sector event in China and Asia. Messe München has been the co-organizer of CBB since 2011. It takes place on a two-year cycle, the next event being from October 23 to 26, 2018 in Shanghai.

Vietnam, too, is turning into a growth market for beer in the Asia-Pacific Region. The country is now the biggest beer consumer in the ASEAN Region and the third-largest in Asia, after China and Japan. India is primarily a market for spirits, but beer consumption is slowly rising. In particular high-priced beers are in demand. For the beer market in India, analysts from TechNavio are forecasting an annual growth in volumes of around 15 percent up until 2018. According to Euromonitor International imports of premium beer will rise by 11 percent per year through until 2018. Craft breweries, too, have shot up out of the ground in the large urban centers in India. drink technology India (dti), International Trade Fair for the Beverage and Food Industry, takes place each year in India, its venue alternating between Mumbai, New Delhi and Bangalore. This event is organized by Messe München and its subsidiary MMI India. So just a few weeks after drinktec the sector comes together in New Delhi, from October 26 to 28, 2017. Together with International PackTech India and FoodPex India—both held concurrently with dti—this trio of events form the most important platform in India for these sectors.

As well as the broad spectrum of products and services on show at the exhibitors booths, drinktec 2017 in Munich has a whole lot more to offer brewers:

•For example, the world championships for beer sommeliers, which takes place every two years. In 2017 the date will be 10 September, one day before the start of drinktec. On that day the world´s best beer connoisseur will be crowned for the fifth time. The championships are organized by the Doemens Academy. The champion beer sommelier is selected from a total of over 2,000 hopefuls.

•The place2beer with beer tastings, success stories and a mix of lectures on diverse themes will be a popular gathering place for brewers, beer lovers and all those involved in the world of beer. Hall B1 is the place to be for start-ups, SMEs and craft brewers.

•The Microbrew Symposium on the first day of the show is directed at the special-beer and craft beer movement. The themes focus primarily on technology and quality aspects of professional craft beer brewing.

•Also, Orange Spirit, the beer specially brewed for drinktec, will be available again this year, with a slightly adapted recipe: “drinktec is mainly a trade fair for breweries. And of course we will again be brewing a special beer for drinktec: the Orange Spirit with eight weeks maturing period,” said Dr. Wolfgang Stempfl from Doemens Academy.

•The very well received Innovation Flow Lounge will be continued at drinktec 2017, but with a new concept: It will share a communication platform and bar space with the Special Area New Beverage Concepts in Hall B1, which will give rise to synergies. For example via the IDEArena for the presentation and exchange on trends and innovations in the sector, the “Talking Table” and its chaired discussion sessions, and the “5 o‘Clock Theme” with visionary keynote speeches to round off each day of the fair.

Every brewer, large or small, will find something to interest them in the wide variety of solutions and themes presented at drinktec.