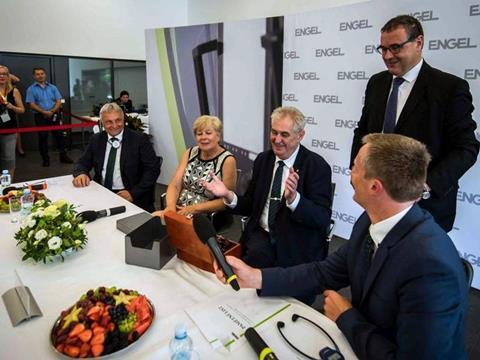 On his three-day tour of South Bohemia, the Czech President Miloš Zeman and a group of delegates and members of the press visited the ENGEL production plant in Kaplice – the only industrial enterprise on the agenda.

Zeman praised the worldwide leading producer of injection-moulding machines above all for its sustained success and continued investment in South Bohemia.

Ivana Stráská, the South Bohemia Region Governor, accompanied the delegation. The politicians were impressed by the state-of-the-art manufacturing facility and its ongoing expansion. The plant is being enlarged significantly up to the spring of 2018. ENGEL, which has its headquarters in Schwertberg, Upper Austria, is investing a total of 46 million euros in expanding the manufacturing capacities and in new technologies at its South Bohemian plant. Two hundred and fifty new jobs are being created at the site.

Great praise for training commitment The President was particularly interested in ENGEL’s active commitment to apprenticeship training. Since 2015, ENGEL has been running an apprenticeship programme for technical professions in Kaplice and has set up its own apprentice workshop for the purpose. For the theoretical instruction ENGEL cooperates with two vocational training schools in the region.

The programme is based on the Austrian dual education model, which is still the exception in the Czech Republic to date. Places on it are consequently highly sought after.  In dialogue with the workforce Following a round of talks on economic issues, in which the directors of ENGEL Strojírenská, Peter Jungwirth and Gerhard Lumetsberger, the divisional managers of ENGEL Strojírenská, and also the managing directors of the ENGEL Group took part, the President answered questions put to him by the workforce. Had the President been to Kaplice before, and what was his connection with the location, the ENGEL employees were interested to know, and would there ever be a motorway from Prague to Kaplice and to the ENGEL headquarters? There were also some political questions, including on the future direction of the European Union and the role of the Czech Republic in its development.

“For ourselves and all the employees here on site, President Zeman’s visit is a great honour,” Peter Jungwirth remarks. “Our employees were delighted that the President took so much time to answer their questions and on several occasions praised ENGEL’s positive economic development. That is extremely motivating for our company.”