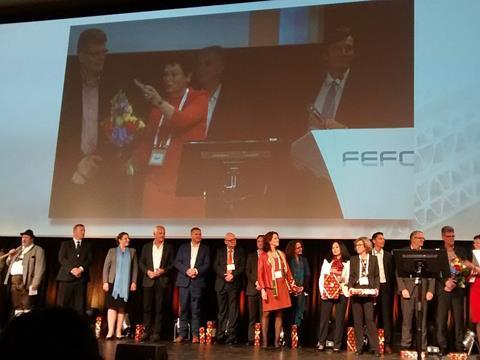 FEFCO, the European Federation of Corrugated Board Manufacturers, honoured some of the most innovative and exciting names in packaging with awards in Vienna on October 13 at the end of the three-day Technical Seminar organised by the association.

The most prestigious FEFCO award was for Best Innovation, and this year there were two gold winners:

- BHS, for their new single facer Modul Facer MF-A. FEFCO jury said this offered, “a solution to the ever-increasing complexity on flute changes. The Modul Facer MF-A makes it possible to change flute positions in a very flexible way, without losing all the advantages of the traditional module facer.” BHS’s Thomas Murr collected the prize.

- BOBST, for their introduction of the online gap control on bundled boxes. The FEFCO jury said Bobst, “was taking the request of our industry seriously to check the gap control on boxes after the counter ejector.” This could help the industry reach the goal of zero defect deliveries. Bobst’s Yves Bletterie picked up the award.

A bronze Innovation Prize went to Fosber, for their new Pro/Care, which the FEFCO jury said was “bringing to our industry a structured, well defined comprehensive approach on collecting and analysing available data.” It was handed to Fosber’s Tim Straker.

The Best Presentation Award, out of some 60 six-minute spotlights delivered during the Vienna seminar, was won by Göpfert, Lena Bördlein collected it for her presentation, ‘Göpfert, the Next Generation’.

The Most Inspiring New FEFCO Member Award went to Elitron, which has moved from a supplier of digital cutting tables for Italian leather to the worldwide corrugated industry. It was handed to Elitron’s Luca Lui.

The Sustainability Award went to Metsa Board, which has invested in a next-generation bio-product paper mill in Finland, proving that businesses can support the goals of the circular economy goal by cutting the carbon footprint of paper production. The award was collected by Metsa Board’s Leena Ylinimie.

Two business leaders who have contributed hugely to the industry were awarded FEFCO’s first ever Lifetime Achievement Awards. One went to BP Agnati’s Renato Rossi, “in recognition of his lifelong commitment to developing the corrugator, enhancing the single facer to process lightweight papers and introducing ‘colder’ corrugators,” according to the jury citation. The other went to Daniel Tatti from Bobst, “for his long-term research and innovation in the field of printing, developing solutions for the Corrugated Industry.”

FEFCO Secretary General Angelika Christ mentioned that “over the last few days I could see overwhelming smiles honouring the efforts of many people that worked hard to make this event a real success.”