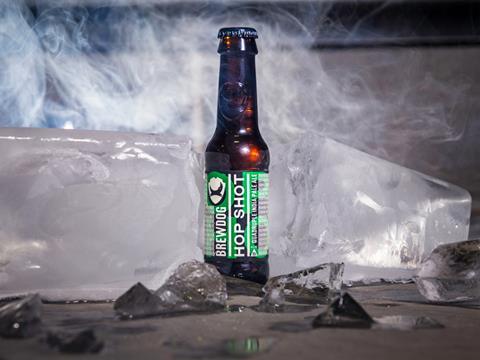 Scottish craft beer innovator BrewDog has upped the ante with its latest powerfully hopped product: a 22% miniature hit of hops sold in 100ml bottles designed and manufactured by Beatson Clark.

Hop Shot is described by BrewDog as “a high-velocity hop hit” and is achieved through ice distillation, which concentrates strength and flavour by removing the ice that forms during the brewing process.

“This was a challenging design as we had to maintain the small capacity while meeting the height requirements of the filling equipment,” said Chris Palmer, Business Development Manager at Beatson Clark.“Even though it’s a small bottle we were still able to emboss the BrewDog logo on the neck to complement the Abstrakt bottle we designed for them at the same time.”

“BrewDog is a long-standing customer of ours and we’re always happy to be asked to produce a new bottle for them,” Chris added.

“We are well placed to fulfil this type of contract as we have a great deal of experience in glass packaging for the brewing industry and we can manufacture bespoke bottles at small volumes.”