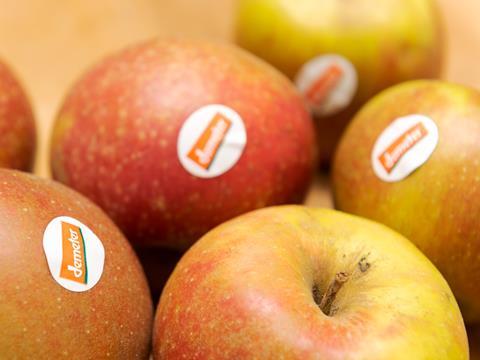 Waste disposal experts are calling for plastic stickers on fruit to be banned, a move that they say could save over 100 million extra pieces of waste a week.

According to Great British Apples, around 122,000 tonnes of apples are eaten each year in Britain – meaning that, at an average weight of 80g, approximately 29 million individual apples are sold in the country each week.

Combined with other fruits that come adorned with a sticker, such as bananas, avocados, and pears, this figure reportedly reaches over 100 million pieces of plastic waste heading to landfill each week.

BusinessWaste.co.uk, waste disposal, and recycling experts, say that the cumulative effect of the familiar sticker on each piece of fruit is an example of a completely unnecessary addition to landfill.

“It’s quite literally a fruitless waste,” says Mark Hall, spokesperson for BusinessWaste.co.uk. “These stickers are removed immediately, thrown in the bin or littered in parks on picnics, and they find their way to landfill. Fruit has its own packaging as provided by Mother Nature - why on earth do we find it necessary to pop a bit of plastic on to make a healthy snack into an environmental hazard?”

The experts have suggested a number of ideas that they say could help to tackle this issue - including edible barcodes that sit on the skin of fruit - but, so far, nothing has taken off at scale.

Mark Hall continues: “When you see Morrisons selling a single banana - a fruit that comes in its own protective skin - in a non-recyclable tray with single-use wrap, you know we’ve reached an unnecessary level of packaging. Fruit stickers aren’t biodegradable, can’t be recycled, and do nothing that signage around the shelves or options on the tills for checkout workers couldn’t do.

“Fruit is brilliant and we aren’t discouraging that - we should all be getting our five a day! - but we urge retailers and produce growers to innovate and find new ways to market their products. There must be a better way, and it doesn’t involve creating pointless pieces of plastic to stick onto food.”