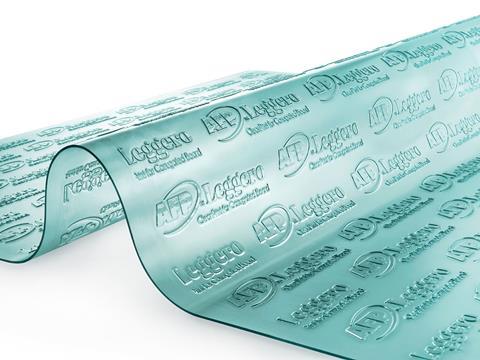 Asahi AFP-Leggero CleanPrint plates have been specifically designed for printing on lower quality low-liner corrugated board. The company says its super-soft plate delivers kiss-touch printing without board crush, good ink density with reduced washboard effect, and is ideal for simple brown-box corrugated applications such as fruit trays and single-colour logo type printing.

“With the growing use of corrugated board packaging around the globe, brands and retailers increasingly seek ways to increase quality appearance and protect their goods at the same time,” said Dieter Niederstadt, Asahi Photoproducts’ Technical Marketing Manager. “Asahi’s AFP-Leggero flexographic printing plates deliver both higher quality and better protection of the product by not damaging the corrugated box flute structure. This is a very new approach inside Asahi, not only to focus on print quality aspects but also to add value in terms of the protection of the packaged goods.

"Our ‘Just Kiss. No Crush.’ tagline reinforces this quality and the protective result delivered by Asahi AFP-Leggero CleanPrint plates. In addition, as with all of our CleanPrint plates, the Leggero plates ensure less waste, fewer press stops for plate cleaning, and consistent exceptional quality throughout the run, the hallmark of Asahi’s CleanPrint flexo plates. We expect packaging converters will be able to achieve up to 15% improvement in Overall Equipment Effectiveness (OEE) when they use these plates for corrugated post-print, delivering a solution in harmony with the environment.”

CleanPrint plates from Asahi Photoproducts have reportedly been specifically engineered to transfer all remaining ink to the printed substrate. The AFP-Leggero CleanPrint effect is achieved because of the soft plate base material. The result, Asahi says, is very clean printing. According to the company, another important benefit of Asahi’s CleanPrint plates, including AFP-Leggero, is that they do not need to be cleaned as often as conventional digital solvent plates. Reduction of plate cleaning stops apparently creates a significant productivity improvement as well as more consistent quality.

“With AFP-Leggero’s soft-touch kiss printing,” Niederstadt added, “not only is the historical problem of board crush and washboarding virtually eliminated due to the softness of this plate, but there is also virtually no dot bridging and good ink laydown. That means that areas of solid colour, as well as highlight areas, are clean and crisp, as are fine lines and smaller type. This is the ideal plate for corrugated board post-print and will enable packaging converters to broaden the range of applications they can produce for customers, especially those who are not willing to sacrifice quality.”