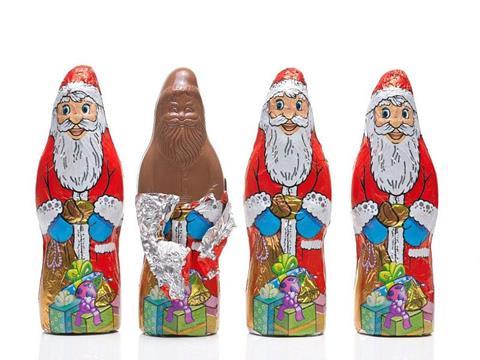 It's beginning to look a lot like Christmas – outside in the shopping windows and especially in the supermarkets where glittery chocolate Santa Clauses and other figures are lined up on the shelf.

Over 150 million Santa Clauses are produced annually for the season in Europe alone – most of them in Germany but also other countries like Austria. Compared to 2016 that is an increase of about 1%.  Based on an average size of 0.025 square meters per figure, this is more than 3,750,000 square meters, which is roughly 1.8 times the size of the Principality of Monaco.

Almost all of the chocolate hollow figures are wrapped in shiny and colourful aluminum foil - giving the figures their iconic look. But not only the looks are important here: The aluminium foil offers complete protection from the light and other influences from the outside that might be harmful for the food quality.

“The deadfold effect of the aluminum foil allows the foil to be wrapped tightly around the chocolate product during packaging and remains so in the supermarket or other points of sale until it arrives at the consumer for the ultimate moment of consumption. After that the aluminium foil can move on to its next life when properly collected and recycled. In Germany the average recycling rate of aluminium packaging is 87 percent*” says Marika Knorr, Deputy Executive Director at the European Aluminium Foil Association.

This tradition is very old: The first Santa Claus figures started to be made from solid chocolate around 1820. Approximately 20 years later, they were produced for the first time as hollow bodies in the form which is used today. Many European packaging companies have a long history of producing printing foil and film for Santa Clauses, Easter bunnies and other chocolate figures. The patented method, which involves aluminium foil being produced industrially and rolled, has been in existence for more than 100 years. Since then, chocolate producers in Europe and the USA have been wrapping their products in aluminum foil.

In addition to Europe, many Santas are exported to the United States, Australia and even to Japan to make sure that everyone has something they can enjoy during the festive holiday season.