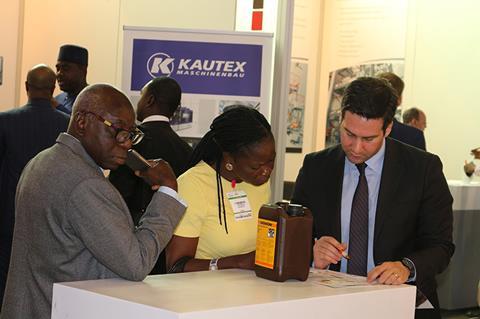 During the three exhibition days 28 to 30 March, 1,958 visitors (+15% compared to 2016) visited the show and discussed their business with 110 exhibitors from 20 countries (+28%), making it a record participation. The event was the first ever exhibition filling both halls of the Landmark. 85% of the exhibitors would recommend the show, 80% are satisfied with the fair as a whole and 74% are satisfied with the number of visitors, 70% being decision makers. The next edition is scheduled for 27 to 29 March 2018.

Organised by the German trade fair specialists fairtrade agrofood & plastprintpack Nigeria 2017 took place on 28 to 30 March at the Landmark Centre in Lagos.

“This year 110 exhibitors from 20 countries were represented, a plus of 28% compared to last year”, says Leonie Ganser, project manager at fairtrade. “Also the number of visitors was increasing as 1,958 visited the show, a plus of 15% compared to 2016.” It was the first ever exhibition filling both halls of the Lagos Landmark Centre. 85% of the exhibitors would recommend the show, 80% are satisfied with the fair as a whole and 74% are satisfied with the number of visitors, 70% being decision makers.

Exhibitors very satisfied with the fair as a whole

Exhibitors were very satisfied with the whole fair as 85% of them would recommend it. Mr Andreas Kruger, Country MD West Africa of GEA West Africa, says: “We are active in Nigeria since 2012. It is an emerging market with a population of 180 million people. We participate here at agrofood Nigeria 2017 to show market presence and we are satisfied with the quality of the professional visitors.”

Mr Daryl De Swardt, Sales Manager from MACADAMS points out: “We participate at agrofood Nigeria 2017 to increase our sales and to increase our exposure and we are very satisfied with our professional visitors. We have met many decision makers.”

And Mr Elom Weti, Head of Technical Sales Subsahara from ADM Wild compared: “We are at agrofood Nigeria 2017 to propose actively our customers the most suitable solutions and that we can make them successful in their business. We have quite good professional visitors comparing to 2015 and 2016. We are looking for a long term partnership with them.

For the first time Germany hosted an official German Pavilion which was presented by the Federal Ministry for Economic Affairs and the Association of the German Trade Fair Industry AUMA, and supported by VDMA-German Engineering Federation. For the third time the French agrofood association adepta was leading a delegation of French companies. Also Italy and China both had for the first time a remarkable presence.

agrofood & plastprintpack Nigeria 2017 was marked by a full program of conferences and seminars featuring lots of great speakers and topics and live bakery demos at the French Pavilion. The German Engineering Federation VDMA again held a Symposium on “German Technology – Tailor made for foodstuff processing & packaging” on March 29.