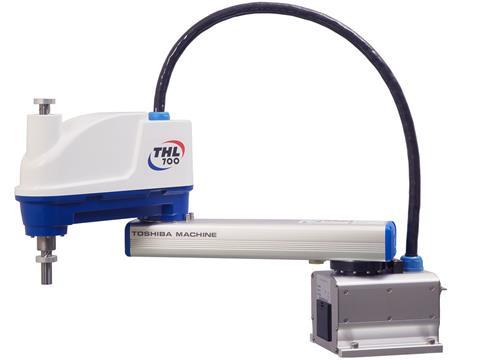 At PPMA 2018, with UK distributor, RARUK Automation, TM Robotics will demonstrate Toshiba Machine’s THL700 SCARA robot. The robot will operate in collaboration with the Flexibowl feeding system to exhibit a fully automated pick-and-place system. The demonstration will be held at the RARUK Automation stand, E20 from 25 to 27 September 2018.

At PPMA 2018, the mid-sized model THL700 will be displayed alongside the Flexibowl parts feeding system. The Flexibowl is a vibratory feeding solution used for automotive, electronics and industrial parts and components. Using a rotating disk, actuated by a servomotor, the Flexibowl provides a straightforward but incredibly effective way of sorting and separating small parts.

The THL700 will be at hand to accurately pick and place these parts from the Flexibowl system, demonstrating a fully automated method of selecting and manoeuvring difficult-to-handle components on a production line.

“PPMA marks the launch of the THL700 and Flexibowl combination to the British market,” explained Nigel Smith, manging director of TM Robotics. “The THL700 is one of the most cost-effective of Toshiba Machine’s SCARA series, making it the ideal automation for price conscious end-users and systems integrators. Uniting this with the Flexibowl system provides these users with a fully automated system to simplify otherwise tedious processes.”

The demonstration will be manned by representatives from RARUK Automation — TM Robotics’ official distributor of Toshiba Machine robots to the UK.

“Following the launch of RARUK Automation’s partnership with TM Robotics at MACH earlier this year, we are confident that RARUK’s team of technical experts are well practiced in demonstrating how easily Toshiba Machine robots can integrate with other components of automated processes,” concluded Smith.