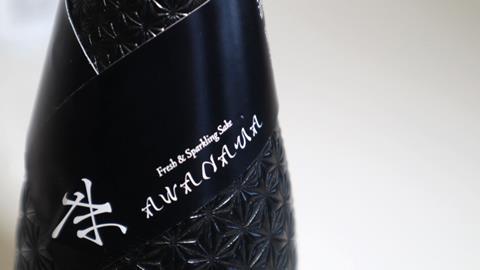 The Story of the Rice Wine and the Complex Bottle

Earlier this year, while serving as one of the judges in the Packaging Innovation Awards (organised by Dow) I came across an intriguing packaging innovation from Japan: a black plastic saké bottle that made an excellent impersonation of a premium glass container. It wasn’t immediately clear how the package had been manufactured. Following some curiosity-driven destruction, a PET bottle was revealed under the opaque exterior. The black, outer layer looked to have been applied as a shrink film, but it was textured with an embossed effect. It was thicker than any shrink sleeve I’d seen, which suggested it was providing a barrier function on top of its aesthetics. I needed answers! – and eventually discovered that the story featured unexpected innovation in PET converting-filling technology and product processing, as well as in the primary package that first caught my attention. 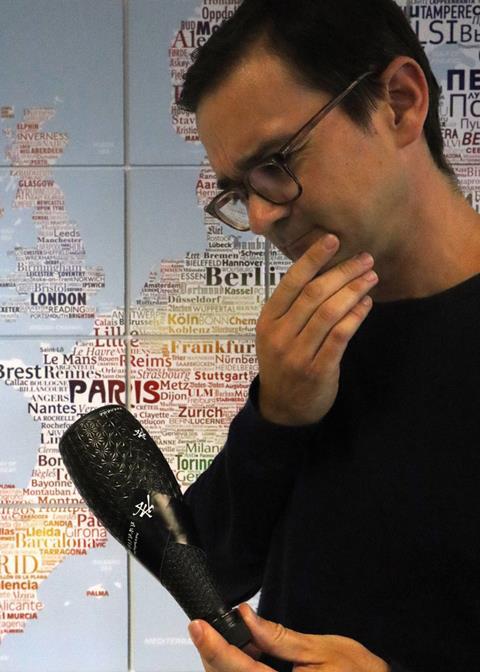 With a bit of help from both Google image searches and Google Translate, I tracked down the bottle, which turned out to be the brainchild of Dai Nippon Printing (DNP) for the rice wine brand ‘Awanama’. For those needing an introduction, DNP is a business with over 140 years of history, still centred in Japan but today a global conglomerate with a $13 billion turnover and a diverse portfolio active across multiple industries, including printing, packaging, optics and electronic communications. DNP kindly shared the inside story of the mysterious saké bottle.

Let’s start with the product. The variety of rice wine in question is ‘Nama-Zake’, which is a especially fresh tasting and fruity because it is conventionally unpasteurised. Lacking the usual pasteurisation, however, its taste can deteriorate quicker than other sakés, and this short self-life makes it hard to export – at a time when the export saké market is undergoing something of a global boom. An R&D project based in Niigata University of Pharmacy and Applied Life Sciences worked on this problem between 2016 and 2018, and came up with a new high-pressure pasteurisation method that doesn’t require heat. This project formed the basis of the consortium which launched the new Nama-Zake brand Awanama.

A key feature of the technology is that sterilisation is performed after the rice wine is filled into its bottle. This imposes certain demands on the bottle itself: it needs a certain elasticity to withstand the process. In other words, Awanama would require a plastic bottle rather than the traditional glass. However, this created new challenges. First, Awanama was not created as a ‘utilitarian’ brand (as DNP put it), but as a premium product. A traditional PET bottle hardly conveys the right image. In addition, on the functional level, rice wine has significant light and gas barrier requirements that a standard PET bottle cannot meet. Moreover, coloured PET is prohibited in Japan. This is where DNP’s original approach provides the solution.

“We had developed a complex bottle, whereby a transparent plastic bottle is moulded in an integral fashion with a coloured film,” explained DNP. “This protects the product from light because the functional film covers the PET bottle entirely, including the bottom.” 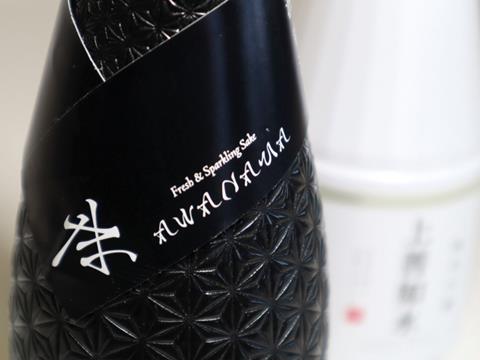 “The polyolefin film we used is more flexible than PET film and DNP observed that the substrate follows the microscopic and convexo-concave shape of the bottle moulding in the course of high pressure bottle forming,” DNP commented.

Sustainability requirements are yet another consideration that informed the technological choices. Awanama needed a coloured plastic bottle without using colouring agents in the PET, which would render it unacceptable to Japan’s recycling system. Instead DNP’s complex bottle enables the coloured, outer polyolefin film to be separated from the transparent PET bottle. Separation is possible either by having the consumer cut off the outer film or using the specific gravity separation method in water tank after bottle is crushed. 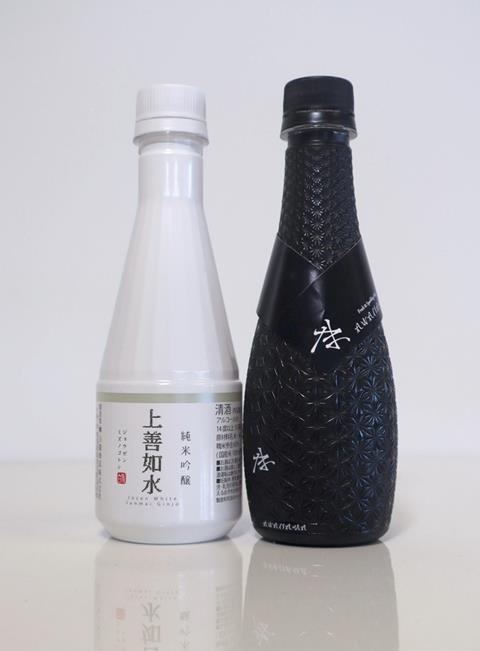 In July 2018 the bottle was launched by the Japanese saké brand ‘Jozen Mizuno Gotoshi’ by Shirataki. Meanwhile, the Pressure Nama-Zake consortium test marketed Awanama in the US, France and Hong Kong. Feedback indicated that consumers were impressed by its combination of lightweight unbreakability and luxuriousness. “When we cut off our functional film complex bottle and showed transparent PET bottle in demonstrations, consumers were amazed by our technologies,” DNP remarked.

DNP is expecting to steadily sales of the complex bottle, aiming for annual sales of one billion yen in 2020. In the meantime, its R&D teams will be busy working on technological extensions (along with a range of other areas of innovation centred on recyclability in laminates and other substrates).