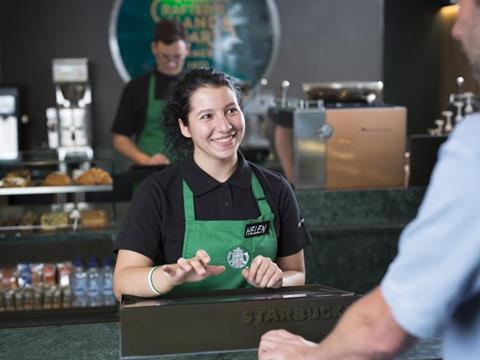 Starbucks has revealsed results from the first six weeks of a three-month trial, evaluating the impact of a 5p paper cup charge in 35 stores across the City, West End, and west London. Results show reusable cup usage has increased by 156.6% in the trial stores, measured by the number of customers redeeming the 25p reusable cup discount.

Starbucks has also announced a trial in 54 stores in London and Manchester to test alternative solutions for plastic straws. The trial, starting in May, will test two new straw alternatives, including a paper and biodegradable plastic straw.

Starbucks-commissioned research in February found that almost half (48%) of people surveyed said they would carry a reusable cup, saving money and reducing waste. The percentage[3] of customers bringing in their own cup or tumbler since the launch of this cup charge trial has increased to 5.9% in the trial stores, up from 2.2% in the same stores before the trial began. The most significant change has been in the mornings with 8.4% of customers in trial stores now using a reusable cup or tumbler.

The proceeds from the 5p charge are being donated to environmental charity and behaviour change experts, Hubbub. At the end of the trial, Starbucks will share a conclusive report in collaboration with Hubbub, evaluating the overall impact of this three-month trial on customer behaviour and assessing its contribution to helping to reduce waste and encourage the use of reusable cups.

Since 1998 Starbucks has offered a reusable cup discount in the UK to encourage customers to bring in their own cup or tumbler. In 2014, Starbucks launched a £1 reusable cup to make it as easy as possible for customers to reuse at an accessible price.

Jason Dunlop, chief operating officer, Starbucks EMEA said: “We are encouraged by the initial results of our trial that show that by charging 5p and increasing communication on this issue, we can help to reduce paper cup use. Now those same customers can also help us to test innovative plastic straw alternatives, to further reduce our impact on the environment. We look forward to sharing the full report on this cup charge trial, in collaboration with Hubbub, with the wider industry as we work together to find sustainable solutions.”

As part of Starbucks ongoing commitment to environmental action and sustainability, British stores are also now signed up to Refill and will soon appear on the Refill app, which helps consumers find locations to refill their water bottles for free, whilst on the go.