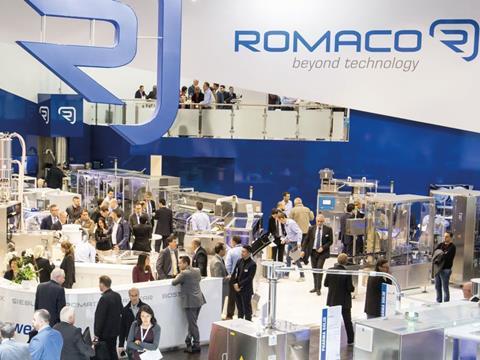 Romaco took advantage of the recent interpack 2017 to show a total of 15 machines not only to industry professionals but also to its new owner, the Chinese Truking Group. Seven innovations and the launch of a new product line attracted numerous visitors to the exhibition stand.

interpack 2017 marks the beginning of a new era for Romaco. Just two days before the Dusseldorf fairground opened its doors, Deutsche Beteiligungs AG (DBAG) announced the sale of the Romaco Group to the Chinese Truking Group in Changsha. The new owners, among them Truking founder and Chairman Yue Tang, took the opportunity to pay a two-day visit to the Romaco booth at interpack. “After our intensive negotiations, it was a good chance to get to know each other better in an informal setting – and for Romaco to show itself off at its best in the presence of the new owners”, emphasised Paulo Alexandre, CEO Romaco Group.

Innovations for the pharmaceutical process chainThe Romaco Group exhibit at interpack 2017 comprised 15 different machines, including three packaging lines and nine standalone units for manufacturing and packing pharmaceutical solids. The launch of four new machines in the corporate industrial design underlined the supplier’s key role within the Group with its very broad portfolio of seven brands. In addition to the new Noack NBP 950 blister machine and Promatic PCI 915 intermittent motion cartoner, the Siebler STF 120 tube filler also made its debut at interpack.

The KTP 590X, the youngest addition to the successful KTP series, was premiered by Romaco Kilian. This single-sided rotary press for bi-layer and effervescent tablets was sold to a Korean pharmaceutical manufacturer directly at the exhibition. The laboratory scale VENTILUS® V 5 from Romaco Innojet with the IHD 5 hot melt device, which is now available for the first time in a GMP design, was a further innovation in the area of processing technology. Several selected classics like the Noack 960 blister line, the Macofar MicroMaxX 18 aseptic powder filling machine, the Kilian KTP 720X and STYL’ONE Evolution tablet presses and the Innojet VENTILUS® V 100 were also presented by Romaco.

Promising resultsYue Tang, Chairman of the Truking Group was thoroughly impressed: “The diversity of Romaco technologies at interpack is an inspirational experience. The synergetic effects of the brands are instantly apparent to visitors to the trade fair and the potential created by Romaco’s system solutions for the global pharmaceutical industry is easy to see.”

“It was an interpack with the focus on content”, concluded Paulo Alexandre, CEO Romaco Group. “More than three quarters of the people we spoke to at our booth were new or existing customers, and the dozens of talks we had and the negotiations we engaged in were output orientated and targeted.”

Kilian and Macofar sales representatives each signed deals with customers from Asia and North Africa directly during the interpack week. The new STF 120 tube filler from Romaco Siebler was sold to a German pharmaceutical manufacturer even before interpack began. The MicroMaxx 18 was acquired by a customer in Spain prior to the exhibition. The Noack 960 also changed hands only a few weeks after it finished. This blister line will soon be on its way to Mexico.