Plastic Packaging: Too Good to Throw Away 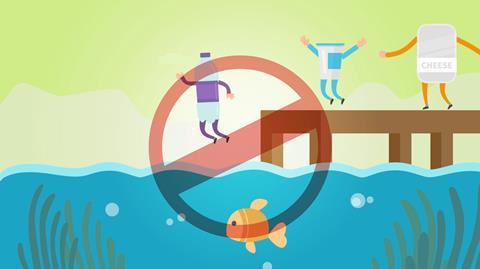 And plastic packaging is also a valuable resource after use. That’s why it is collected and recycled. Germany has an efficient and extensive collection and disposal system, which has been further strengthened by the new packaging law, and already recycles fifty percent of plastic packaging from the yellow bag or yellow bin. As the remaining fifty percent is too soiled for reuse, it is thermally recycled and converted into energy for use in district heating, instead of oil.

Everyone has the choice in Germany: to drop litter carelessly or dispose of it in an environmentally friendly mannerYet there are still people in Germany that carelessly throw packaging away after use. The consequences of this “littering” can be seen everywhere in parks, motorway lay-bys or on the beaches of the North and Baltic coasts.

“There is certainly no shortage of disposal opportunities in Germany, it is simply that individuals are failing to behave in an environmentally friendly manner. After all, plastic packaging does not jump into the sea by itself,” comments Ulf Kelterborn. However, the IK does not believe that this behaviour should necessarily lead to a ban on the use of plastic packaging. “If we stopped using plastic packaging or only used it to a limited extent, it would have serious economic and ecological consequences.” Instead, we need to provide information and create an awareness of the problem, in schools for example. The IK supports this goal by providing corresponding brochures and film material and also takes part in the “Round Table on Marine Litter” established by the Federal Ministry for the Environment, in the working group on awareness building for example.

Marine litter is a global challengeThere is an urgent need to take effective action to combat the global pollution of the world’s oceans. Eighty percent of plastic waste in the world’s oceans comes from Asia. Sustainable collection and recycling systems must be set up in these regions. It would be quite possible to follow Germany’s example here, where the distributors of products pay licence fees to contribute to the funding of waste collection. As a national association, the IK is also involved as far as possible in global initiatives to combat marine litter and was one of the first to sign the “Joint Declaration for Solutions on Marine Litter” which 69 plastics associations around the world have since joined.

Besides the undoubtedly vital projects to collect discarded litter such as the Coastal Cleanup Day, the IK believes that prevention and waste management are the two key elements in any solution to the problem of marine litter.