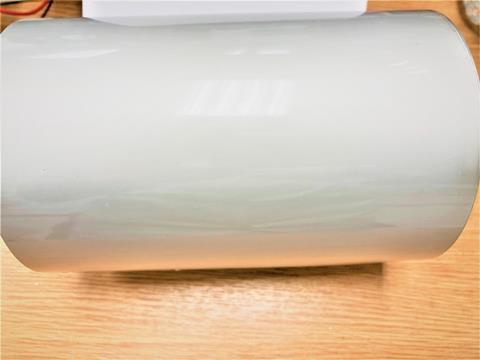 Idvac Ltd., a UK vacuum research and development specialist, has developed a bright white, non-pigmented metallised film that does not contain titanium dioxide and can be used for applications including barrier packaging and labelling.

White films are used in applications including packaging, pharmaceuticals, solar reflectors, and farming. These white films are usually made using white pigments of titanium dioxide (TiO2), which scatter visible light to give the films their whiteness, brightness, and opacity.

Titanium dioxide is available in two crystal structures: anatase and rutile, with the latter apparently being the preferred option as it scatters light more efficiently and is more stable and durable. Idvac says that spherically shaped, non-absorbing, high refractive index titanium dioxide powders are typically used in the manufacturing of white films.

According to Idvac, the use of titanium dioxide is associated with a high environmental burden, health and safety concerns, and a high carbon footprint. The company has developed an alternative non-pigmented metallised white film that does not contain titanium oxide, which it says maintains an “excellent” scattering performance across the visible electromagnetic spectrum.

Idvac’s manufacturing approach reportedly involves the utilisation of a special low refractive index polymer that is transparent when applied as a thin coating onto flexible films. The company adds that the polymer changes its colour and opacity to white following the vacuum metallizing of aluminium.

The company explains that the aluminium/polymer reaction results in light scattering from the film surface to give the white colour. The aluminium can apparently be applied using thermal, sputtering or electron beam evaporation techniques, while Idvac adds that its special polymer can be applied or printed on flexible films using a standard coating machine such as gravure or flexo printing.

Flexible films such as PET, BOPP, and polycarbonate (PC) can be coated with this new white metallised finish, according to the company. The white film can reportedly also be hot stamped for some applications to give a white, bright finish.

Idvac concludes that the metallised film can be used in applications such as the hot stamping of security or non-security products like labels and as normal and barrier packaging, including for food and pharmaceutical products.