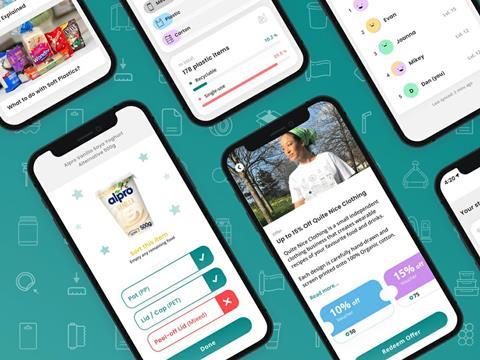 In 2019, while they were still studying at university, Dan Marek, Mikey Pasciuto and Evan Gywnne Davies founded Scrapp - an app designed to make recycling simple by informing consumers which packaging is recyclable in their location.

Released earlier this month in the UK, Scrapp aims to make recycling a smoother and more rewarding experience.

Users can track how much CO2 they have saved by recycling and collect points when scanning products. They are then able to redeem these points in the in-app marketplace to get discounts on sustainable brands or put them towards charitable causes such as clearing waste from the ocean or planting trees. “There’s real, tangible ways of rewarding people for recycling,” said Dan Marek, “and we’re finding that’s been a really effective approach to help motivate people to recycle.”

The business aims to expand into more European countries, Canada, and the US. It is also looking to partner with local authorities, which would enable it to scale.

The project began with the three founders collecting data on the key obstacles that prevented other students in their class from recycling. They discovered that people were confused by recycling and felt that they were not able to make a significant impact by doing it in the first place.

“We were three engineers at the time thinking, ‘alright, let’s try and figure out a solution to this problem,’ and so we looked at a lot of behavioural science models [and] there’s one in particular by BJ Fogg, which we researched a lot in and aligned ourselves with,” said Marek.

“The model goes that if you can remove barriers to somebody doing something - an activity that you want them to do - and incentivize them, then you’re far more likely to encourage them to adopt that new habit, or just improve existing ones.”

Marek argued that the app could have a tangible impact on how consumers recycle. “We found that Scrapp could divert 85,000 tonnes of wrongly placed recycle waste for an average sized city - say, 500,000 users - every year,” he explained, “and the associated savings in landfill fees would be around £25 million.” Anyone can submit new information about the recyclability of packaging on the app, and they are rewarded for doing so by Scrapp removing plastic from the ocean.

Scrapp is also currently working towards improving its product packaging data, its categorisation system, and its platform for organisations. “As Scrapp is a for-profit business, our intention has always been to leverage our technology to help organisations, local authorities, and waste hauliers increase recycling participation rates and reduce landfill fees,” Marek explained. The business is also currently partnering with groups towards a Scrapp pilot.