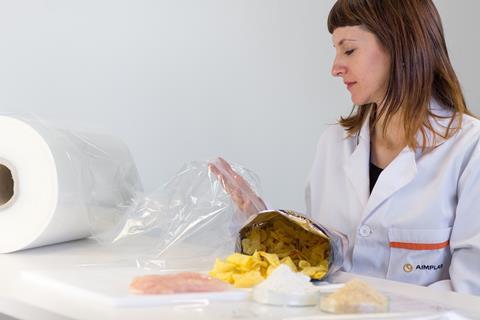 AIMPLAS coordinates the European project REFUCOAT, whose main objective is to develop new materials for food packaging in a more sustainable way.

The project will develop barrier coatings, as well as bioplastics to be used in films and trays as an alternative to the current aluminium-based structures.

Extending the shelf life of food is one of the challenges of the food sector. Currently, modified atmosphere processes are used in the case of meats and fresh food, as well as packaging including multilayer structures with metallised materials for snacks, resulting in products made from non-renewable sources which are also very difficult to recycle.

In order to achieve environmentally sustainable packages allowing to preserve food r in optimal conditions for longer period, AIMPLAS, the Plastics Technology Centre, coordinates the project REFUCOAT. By means of the investigations that will be carried out in the project, innovative material based on biopolymers will be developed, thus replacing those currently used in food packaging in the form of films and trays.

Specifically, polyglycolic acid (PGA) is going to be combined with modified silica oxide in order to formulate a hybrid coating with oxygen and water vapour barrier properties. Furthermore, a new PLA grade from corn wastes will be developed, with better water vapour barrier values than commercial grades. These developments are going to be combined in order to create recyclable packages for chicken, cereals and snacks.

In the project REFUCOAT a total of 12 partners from five countries take part. It is funded by the European Union, through the program H2020-BBI-JTI-2016 with grant number 74591.