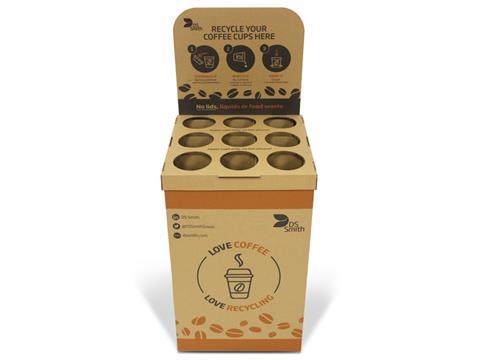 DS Smith has called on independent businesses across the UK to help stop coffee cup waste as it launches a brand-new scheme which it says could see hundreds of millions of cups recycled each year.

In the UK up to 7.8 million cups end up in landfill or are burned every day, with 58% of British workers disposing of their cups at work. To respond to this, and following successful trials with key partners including EY, DS Smith has launched its specially designed Coffee Cup Drop Box.

Made from recycled paper, the box can be used to collect coffee cups from across the UK and is available to the 2.7 million businesses operating in the UK. Each box holds around 700 cups and once full it is collected by Royal Mail and it is returned to DS Smith’s recycled paper mill, the UK’s largest, to be recycled back into new paper packaging products.

Jochen Behr, Head of Recycling at DS Smith, said: “We broke new ground last year when we redefined coffee cup recycling and announced capacity to recycle 2.5 billion coffee cups at our Mill in Kent. With this figure only increasing, we need to ensure these cups reach us separate from other waste. Through our Coffee Cup Drop Box we can provide the much-needed national infrastructure to reduce the 7.8 million coffee cups that are currently falling through the gap on commutes, in offices and across the UK.”

As a result of efforts by DS Smith and others in the industry, coffee cup recycling has increased from 1 in 400 to 1 in 25 cups over the past two years[1]. According to new YouGov research commissioned by DS Smith, over half of GB adults (54%) believe that when they recycle their used coffee cups they are turned into new products. However, nearly 20% of adults think that even when recycled these cups end up either incinerated or landfilled.[2] Critically, the number of disposable cups used each year in the UK is estimated to have risen by 20% from 2.5 billion in 2016 to 3 billion[3].

Despite a major push and incentives to use reusable coffee cups, research shows that of the 46% of Brits who had a reusable coffee cup, only 12% used it all the time when purchasing a hot drink and 41% admitted to rarely or never using it.