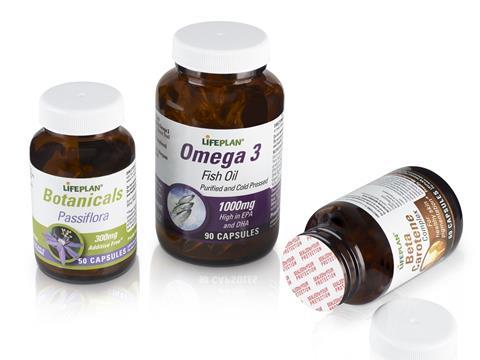 Extended shelf life, increased consumer confidence and tamper evidence are among the benefits that a major healthcare manufacturer has gained since moving to induction cap sealing.

Rod Bray, Operations Manager at Lifeplan, said: “After changing to screw cap lids with induction seals, we have found we have much better product stability as the product is hermetically sealed in our containers.

“This is particularly true on our more sensitive products and in some cases this has allowed us to increase their shelf life.” As well as an extended shelf life, the company has also seen an increase in customer satisfaction.

“Customer feedback has shown preference for an induction seal with a screw cap lid, as consumers find them much easier to open on first use,” explained Mr Bray.

“We use seals that have ‘sealed for your protection’ printed on them, which increases consumer confidence in the product,” he added.

By adding an induction seal to a container, companies gain the added benefit of tamper evidence, which is often a requirement for those in the healthcare and pharmaceutical industries. A tamper-evident design reassures the consumer that a product has not been modified since leaving the manufacturer.

Speaking about this, Mr Bray said: “Induction seals offer very good tamper protection, as it is impossible to tamper with the product without making an obvious break in the seal.”

Lifeplan produces over 280 products which are exported to more than 40 countries worldwide. In a single production shift, the company will induction seal around 10,000 containers.

“Every Lifeplan product is induction sealed and we also recommend induction sealing to any of our contract and own label customers,” said Mr Bray.

“The process is a very simple way to seal products and there is no maintenance required on any of our Enercon machines.”