H.B. Fuller and Covestro team up on new adhesive with 'reduced climate impact' 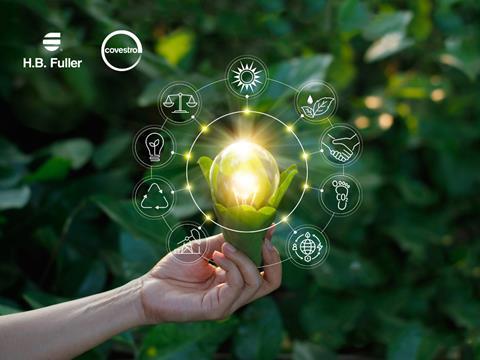 H.B. Fuller, a global adhesives provider, has announced a strategic partnership with Covestro, one of the world’s largest polymer suppliers, to deliver an adhesive that the companies say has a reduced climate impact for the woodworking, composites, textiles, and automotive industries.

The new ingredient used in H.B. Fuller's adhesive is a bio-attributed raw material created via a mass balance approach and will replace a proportion of previously used fossil raw materials.

Renewable raw materials are used as feedstock at the very beginning of the value chain and processed together with fossil-based ingredients in the same production units. The characteristic of the renewable feedstock process is then attributed to the end-product.

The usage of an equivalent amount of the alternative feedstock is guaranteed by Covestro through a third-party verified certification method. By gradually converting its production to alternative raw materials and working with reliable partners, who in turn collaborate with certified suppliers, Covestro aims to replace fossil materials and make its value chains more sustainable.

As mentioned, the correct raw material balance, the allocation method, and the raw material sourcing – according to defined sustainability standards – is ensured via an independent third-party certification.

H.B. Fuller is able to use the new drop-in solution immediately in its existing manufacturing processes without any technical conversion. No adjustments are required at its customers’ facilities either.

The companies also claim that product quality is in no way inferior to its conventional counterparts. The 'reformulation' of the reactive hot melt adhesive reportedly has no impact on its performance, nor on their customers' own manufacturing, and can apparently be treated “in exactly the same way” as the products it replaces.

Both companies argue that the strategic agreement and the process they are now launching together can play a major role in driving the circular economy forward, reducing carbon emissions, and replacing the extraction of finite resources with partly renewable raw materials.