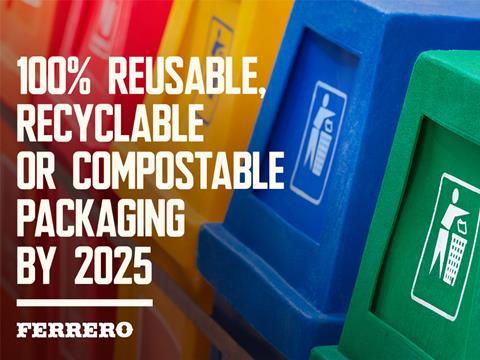 The Ferrero Group has issued an update on its efforts towards making 100% of its packaging reusable, recyclable or compostable by 2025.

As part of this journey, the business has announced new global partnerships with HolyGrail 2.0 and Consumer Goods Forum (CGF), as well as new brand projects.

Ferrero recently signed CGF’s Plastic Waste Coalition’s new Golden Design rules, which are a commitment to assess and redesign the critical elements of packaging, highlighting the need for alignment and scale to drive positive change globally.

Meanwhile, the company has joined HolyGrail 2.0, facilitated by AIM – the European Brands Association. The project aims to prove the viability of digital watermarking technologies for accurate waste sorting, resulting in more efficient and higher-quality recycling.

On the product side, Ferrero’s packaging team, in collaboration with upstream suppliers, has developed a new thinner material, which it says delivers a thickness reduction of approximately 20% compared with standard films.

The new thinner material will be introduced on selected products, such as Kinder Bueno, starting from 2022 and, according to the company, will lead to an initial annual reduction of approximately 550 tons of materials, reportedly saving around 1,450 tons of CO2 compared to the previous packaging.

In Italy, Ferrero is piloting a new paper-based external packaging for its Kinder bakery range, including Kinder Délice and Kinder Brioss.

The new packaging features a method of wrapping Kinder Bakery products using paper film, suitable for recycling in the country’s paper stream. If successful, Ferrero says that the paper packaging will be rolled out across its entire portfolio of bakery products in the Italian market.

A science-based approach has been adopted to design and test the new paper-based packaging using the Aticelca evaluation method. The company claims that the result is an overall weight reduction of 80% versus the previous plastic film used.

Fabio Mora, global packaging director of the Ferrero Group, says: “In 2019, we committed to making all of our packaging reusable, recyclable, or compostable by 2025, and I’m proud to see that we have already made some significant progress on our journey. We look forward to sharing further updates on our progress soon.”