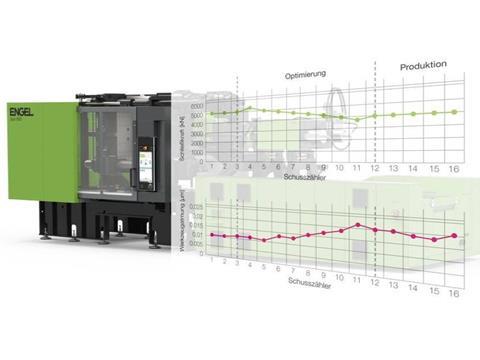 Even the tiniest details, such as mould breathing, can substantially influence production quality. Mould breathing occurs when the injection pressure of the melt partially offsets the compression of the mould caused by the clamping force. The movement caused by mould breathing in the range of several thousandths to hundredths of a millimetre can lead to rejects. Too little mould breathing caused by too high clamping force prevents sufficient mould ventilation and leads to burn marks. If mould breathing is too great, that is, if the clamping force is too low, the result is overfilled cavities which causes visible burrs.  Intelligent clamping force optimisation Historically, it was only possible to manually optimise the clamping force. However, the measurement methods used for this purpose only allowed subjective statements and required a great deal of experience. "Many injection moulders generally work with the maximum possible clamping force for that reason," clarifies Bernhard Lettner, product manager for ENGEL duo machines. "Not only does this increase the risk of rejects, but it accelerates mould wear and needlessly increases the machine's energy consumption."

In order to stop wasting the efficiency potential relevant for competitiveness, ENGEL developed the iQ clamp control software which uses mould breathing as basis to automatically determine the optimal clamping force at the touch of a button. This often saves time at the start of series production. During operation, the system can adjust the clamping force shot by shot. The assistance system uses the information from sensors already installed in the injection moulding machine. Neither is it necessary to install additional sensors in the mould.  inject 4.0 paving the way for smart factory The injection moulding machine builder and system solution provider ENGEL uses the iQ prefix to identify its intelligent assistance systems. The systems, in the controller of the injection moulding machine are intended to help the plastics processors increase the productivity, efficiency and quality of production without requiring the machine operator to acquire special expertise. They are an integral part of the continuously self-optimizing smart factory, which describes the goal of Industry 4.0. Additional assistance systems of this product family are iQ weight control and iQ flow control.

With inject 4.0, ENGEL offers an extensive range of sophisticated products and solutions for the digitalization and networking of manufacturing processes and continuously develops them further. ENGEL will clearly demonstrate the potential of the intelligent assistance systems in combination with other inject 4.0 products at the Fakuma 2017 in Friedrichshafen from 17 to 21 October.