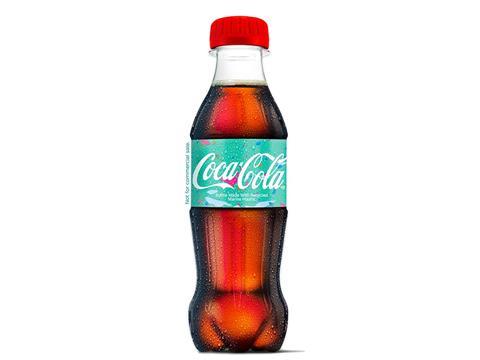 Today, Coca-Cola unveiled its first ever sample bottle made using recovered and recycled marine plastics, demonstrating that one day, even ocean debris could be used in recycled packaging for food or drinks.

Through a partnership between Ioniqa Technologies, Indorama Ventures, Mares Circulares (Circular Seas) and The Coca-Cola Company, about 300 sample bottles were made using 25% recycled marine plastic retrieved from the Mediterranean Sea and beaches.  The bottles were designed and developed to show the transformational potential of revolutionary enhanced recycling technologies, which can recycle previously used PET plastics of any quality back to high-quality plastic that can be used for food or drink packaging, including material that would previously have been sent to incineration or landfill.

The sample bottle is the first ever plastic bottle made using marine plastic that has been successfully recycled for food and drink packaging.  It is being announced as Coca-Cola in Western Europe sets out new goals, in partnership with Coca-Cola European Partners, to support its ambition for a world without packaging waste.

In 2017, as part of their joint Sustainability Action Plan, Coca-Cola European Partners and Coca-Cola in Western Europe pledged that, by 2025, Coca-Cola will: collect a can or bottle for every one that it sells; ensure that all of its packaging is 100% recyclable; ensure that at least 50% of the content of its plastic bottles will come from recycled content.  In 2019, in Western Europe, the Coca-Cola System invested 180m euros in sustainable packaging, both across its operations and in the incubation of new packaging and packaging-free solutions for the future.

Today they are announcing further goals designed to accelerate their delivery of a sustainable packaging roadmap for Western Europe, ensuring that all of their packaging is collected, recycled and reused.

Working to remove all unnecessary or hard to recycle plastic from its portfolio, through lightweighting and the removal of all secondary packaging made from plastic. This will avoid the use of more than 11,000 tonnes of plastic per year. Coca-Cola European Partners recently announced that in Western Europe, it would move from plastic shrink wrap to 100% recyclable cardboard for its multipack cans, removing 4000 tonnes of plastic from its supply chain in 2020. It also recently transitioned its Sprite brand from green to clear PET plastic bottles, which are easier to recycle bottle to bottle

Working towards 100% recycled or renewable materials in all of its plastic bottles, avoiding the use of over 200,000 tonnes of virgin plastic every year.  Coca-Cola in Western Europe will reach 50% recycled content in its plastic bottles two years earlier than its stated goal (by 2023, rather than 2025).  In July, Coca-Cola in Western Europe announced that its Honest, Glaceau Smartwater and Chaudfontaine brands would all transition to 100% recycled plastic in their bottles in 2019/20.

Support for well-designed deposit return schemes across Western Europe, where a successful proven alternative does not already exist, in line with its goal to collect a bottle or can for every one that it sells by 2025.  Coca-Cola, with its bottling partners, will also support well-designed DRS across its wider European markets, where effective alternatives are not already in place.

Transparent disclosure of its packaging footprint on an annual basis by packaging type, as well as reporting on performance against stated commitments and goals.

Tim Brett, President for Coca-Cola Western Europe, said: “Too many of the world’s finite resources are currently discarded as waste.  We know we need to do more to correct this.  The targets we have set out today are ambitious and rightly so. There is a valuable role for packaging, but it must always be collected, recycled and reused.  Our aim, working in partnership, is to see the term “single-use plastic” become redundant, both in our business and beyond, as all of our plastic – and indeed all of our packaging - is delivered within a closed loop”.

Bruno van Gompel, Technical and Supply Chain Director, Coca-Cola in Western Europe, said: “This bottle is testament to what can be achieved, through partnership and investment in revolutionary new technologies. In bringing together partners from across our supply chain, from a community clean up partnership in Spain and Portugal to an investment in technological innovation in the Netherlands, we have been able, for the first time, to bring damaged marine plastic back to food-grade material to make new bottles.

“Enhanced recycling technologies are enormously exciting, not just for us but for industry and society at large.  They accelerate the prospect of a closed loop economy for plastic, which is why we are investing behind them. As these begin to scale, we will see all kinds of used plastics returned, as good as new, not just once but again and again, diverting waste streams from incineration and landfill.”

The marine plastic bottle has been developed as proof of concept for what the technology may achieve in time.  In the immediate term, enhanced recycling will be introduced at commercial scale using waste streams from existing recyclers, including previously unrecyclable plastics and lower-quality recyclables.

From 2020, Coca-Cola plans to roll out this enhanced recycled content in some of its bottles. A newly formed Packaging Innovation Hub will continue to focus and accelerate investment and innovation in sustainable packaging solutions across Western Europe. These include continuing investment in enhanced recycling technologies, as well as alternative packaging solutions for the future, such as paper bottles, bio-based packaging materials, refillable-returnable and packaging-free alternatives, like its dispensed Freestyle or wider micro-dosing solutions.