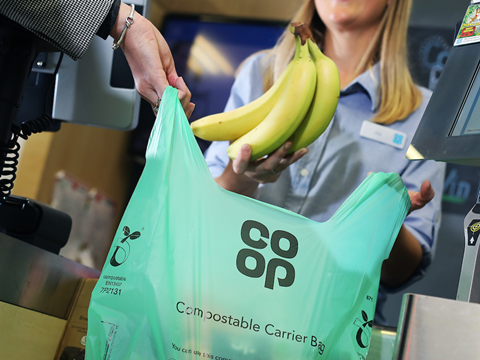 British retailer Co-op is set to remove plastic “bags for life” from all its 2,600 stores, warning that the low-cost, reusable bag has simply become a new single-use carrier.

As part of this move, and ahead of the new carrier bag levy increase coming into place in the UK, the convenience retailer will also roll out compostable carriers to all its stores.

Co-op says that “bags for life” use more plastic in their production than conventional single-use carriers, which has, in turn, increased the amount of plastic in circulation. According to the retailer, this new initiative will remove 29.5 million bags for life, weighing around 870 tonnes of plastic, from sale each year.

Co-op is now urging the UK government to implement a policy that would require major retailers to report on all reusable bags, as well as single-use bags, with the aim of providing greater transparency and tracking the true impact of carrier bag levies.

Co-op’s other recommendations include requiring all single-use carrier bags to be certified compostable and introducing a minimum 50p price for reusable bags to create a greater perceived value to encourage customers to reuse them instead of treating them as single-use.

Data from Greenpeace has indicated that, in 2019, supermarkets distributed over 1.5 billion bags for life – weighing a total of 44,913 tonnes – which is a 56% increase from the previous year.

Jo Whitfield, CEO of Co-op Food, said: “Increased use of bags for life has led to a sharp rise in plastic use. With over 1.5 billion bags sold each year by retailers, this remains a massive issue for our industry as many shoppers are regularly buying so-called ‘bags for life’ to use just once and it’s leading to major hike in the amount of plastic being produced.”

Helen Bird, strategic engagement manager at WRAP, added: “All bags, regardless of the material they are made from, impact the environment. The most important thing to reduce this impact is reuse. Just as we all now carry a mask about ourselves, we should be doing the same with shopping bags.

“Supermarkets have a responsibility to incentivise this and we would like to see transparent reporting on all types of shopping bags – whether they are made of traditional plastic, compostable plastic or paper.”