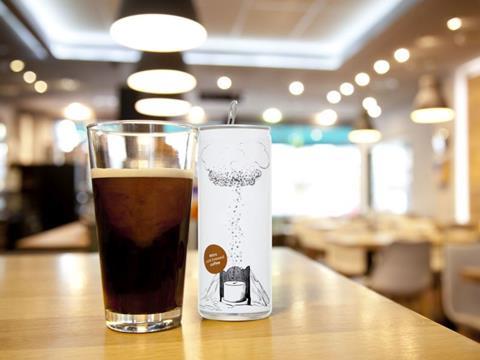 From café to can: Ardagh Group has announced the successful commercialisation of its metal beverage division’s latest innovation - the Nitro Can - a packaging solution launched in late 2016 to capitalise on the nitro coffee trend gaining momentum in key European markets.

Previously exclusive to coffee shops and cafes, nitro coffee is now ready to be consumed anytime, anywhere thanks to the Nitro can’s ability to replicate the effect of a traditional stout faucet while upholding the integrity of the product in lieu of refrigeration. Considered unique to the market, the can features a fixed, nitrogen-infused widget which delivers a powerfully distinct sound upon activation. The nitrogen in turn not only enhances the aroma of the coffee but generates a cascading pour that ultimately tops off the beverage with a creamy, frothy head. On April 6th, the London Coffee Festival’s opening will set the stage for the first of two brands, Minor Figures and Frank and Earnest, to launch their own signature, cold-brewed coffee’s - now nitro-optimised - into this specialty can.

“The Nitro can is an exceptional packaging format which delivers an unrivalled, multi-sensory consumer experience,” said Adriana Escobar, Product Manager at Ardagh Metal Beverage. “The acoustics associated with its opening coupled with the effect when the beverage is poured makes this a compelling addition the product portfolios of such premium brands as Minor Figures and Frank and Earnest.  We are pleased to see the Nitro can showcased at the highly regarded London Coffee Festival and are confident that both consumers and industry-facing attendees alike will find this new packaging format engaging.

Minor Figures, launching their canned product at the London Festival, is one of the cold-brew category’s biggest innovators. Based in the UK, the brand has been leading the pack since 2014, with many world and European ‘firsts’ under its belt. Their latest trailblazing product will be launched at the London Coffee Festival as the brand debuts its original Straight Black cold brew in an Ardagh Nitro Can. “Nitro cold brew coffee on tap is the latest coffee trend in coffee shops across the UK and beyond. We see the launch of Minor Figures Nitro as strategic move in the growth and development of our business, making nitro coffee accessible to the mainstream in a good-to-go format,” said Stuart Forsyth, Founder and Director at Minor Figures. “Minor Figures Black has consistently been a top performer for our company and now, by pairing it with the Nitro Can, we are able to offer consumers a new experience, flooding the coffee with tiny bubbles, creating a draught-style black cold brew that is full bodied, silky smooth and refreshing.”

Frank and Earnest will also be showcasing their cold-brew coffee at this year’s festival.  Ben Lion, Co-founder of the brand, had this to say, “We truly believe you can only provide great coffee if you are passionate about offering great flavours and taking ownership of how the product comes alive - this is entirely true in our approach to Nitro. We have spent a lot of time developing the canned version of our Nitro cold-brew to ensure we offer a genuine shelf-stable, great tasting and looking product. This is one of the reasons why we partnered with Ardagh."

“As a market leader and expert in Nitro products, Ardagh supports entrepreneurs like Minor Figures and Frank & Earnest throughout all stages of the innovation process”, Escobar further stated. “The opportunity to offer the first packaging solution which, on a global scale, allows brands to bring shelf-stabilised nitro coffee to the market is an exciting accomplishment. We see the nitro category as one with real growth potential for coffee brands and believe it’s simply a matter of time before other beverage groups decide to hop on board this trend.”Metal is a permanent material meaning it can be infinitely recycled without loss of quality.  Universally recognised for its protective qualities, versatility and environmental credentials, metal has the strongest recycling rates of all packaging materials in Europe, thus effectively contributing to the fundamental principles of a circular economy.