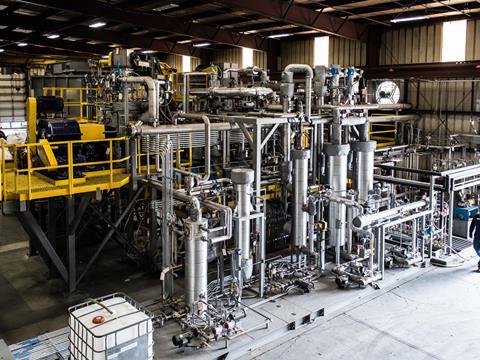 Agilyx, a leader in advanced recycling technology, and AmSty, the largest polystyrene producer in the Americas, have announced the successful completion of a fully circular pathway for polystyrene recycling.

By receiving ISCC PLUS certification (International Sustainability and Carbon Certification) for the complete pathway from waste aggregation to new polystyrene production, the loop on the recycling circle for polystyrene has been completed. These products can now be put back into the marketplace with original quality, holding third-party certification of recycled content.

As we know, there has been increasing focus on polystyrene as a part of the circular economy, so we were interested to put some questions to the team at Agilyx.

For those unfamiliar with the technology, could you briefly describe your solution? Is this a mechanical recycling process?

Agilyx is a pioneer in advanced recycling. Our technology enables the transformation of waste plastics from a linear to circular economy​. Agilyx’s breakthrough pyrolysis technology can be seen at our Regenyx facility (JV with AmSty) which has been operational for several years now in Tigard, Oregon. Regenyx utilizes Agilyx’s chemical recycling process to convert waste polystyrene products back to their original building blocks, which AmSty then uses to create new (circular) PS products for their supply chain partners.

Agilyx also has a number of projects in various stages of development with our partners in the area of plastic to plastic conversion, chemical intermediates or renewable quality fuels. We also just recently announced our collaboration with Lucite, part of Mitsubishi Chemical, to pursue a commercial-scale trial for the recycling of PMMA, commonly known as acrylic or plexiglass.

Could you explain what is meant when you say the recycling and production problem of polystyrene has been ‘solved’ with this technology? What makes it a different to everything else available on the global market?

Regenyx utilizes Agilyx’s chemical recycling technology, which is a truly circular approach. We are able to take mixed or contaminated waste plastics like PS foam cups, foam packaging and single-use items that are uniquely suitable for conversion back to chemical building blocks that can be used to make new products over and over again. We are even able to recycle food grade material back to the same products but also for the upcycling of lower quality non-food grade products to meet food grade usage requirements.

What do styrenics have to offer, from a circularity perspective, that other polymers do not?

Polystyrene is particularly advantageous for advanced recycling because it can be 'unzipped' back to its original liquid form, styrene monomer. Other plastics can also be converted into useful intermediates, but polystyrene offers a truly circular solution. Polystyrene remains the best option for a range of applications such as food and beverage containers.

We have spoken to European cross-industry organizations, such as Styrenics Circular Solutions, which are also looking at ways to approach this problem. Do you think such collaboration is important for materials such as polystyrene which may have been overlooked previously?

Yes, we at Agilyx believe the collaborative approach of SCS is an excellent way to heed the call to action that brand owners are asking for. SCS is doing terrific work to drive the acceleration of styrenics recycling. As you can see from our announcements, we are working with several members of SCS to enable a circular approach.