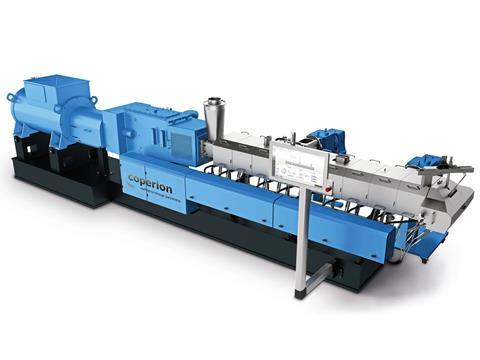 Coperion is implementing a brand-new concept for the production of flexible multi-layer film that it says allows manufacturers to avoid production waste.

Recycling multi-layer film has long posed a challenge since, Coperion argues, such films can only be reclaimed in very complicated ways and not without the creation of residues. Now, however, the company says that it has developed a closed-loop approach in which up to 100% of multi-layer film production waste can be re-processed and fed back into the production process in a closed-loop.

In terms of how the concept works in practice, multi-layer film waste from the production process is shredded as a first step before it is fed into the ZSK extruder via pneumatic conveying and “highly accurate” feeding from Coperion K-Tron. There, the material is homogenized and devolatilized with very high intensity in the co-rotating ZSK Mc18 twin screw extruder.

Following homogenization in the ZSK extruder, in the closed-loop concept, the recycled material is added back into the multi-layer film production process; reportedly with no quality loss and with a high proportion of added recyclate. Thus, Coperion says that its new system allows multi-layer film manufacturing to take place sustainably, efficiently, and in a resource-friendly manner.

Peter von Hoffmann, General Manager of Business Unit Engineering Plastics and Special Applications at Coperion, commented: “Sustainability is becoming more and more important, and the topic of the circular economy is moving further into the foreground for companies – and that is much more so for multi-layer film producers. We’re proud that, with our years of process know-how and our visionary technological solutions, we can contribute to a promising, forward-looking and sustainable closed-loop approach.”