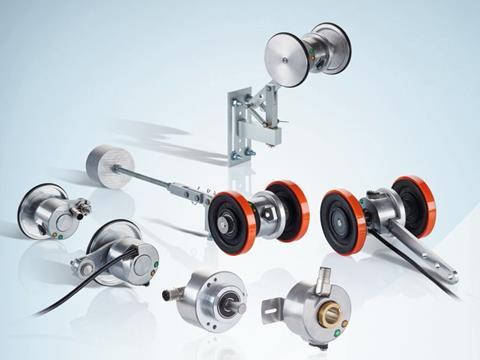 SICK has launched the DUS60 incremental encoder and DUV60 measuring wheel encoder with DIP switch programmability to provide users with a versatile and economical user-configurable motion control sensor for packaging and printing applications.

The shaft-mounted SICK DUS60 rotary incremental encoder can be installed and commissioned quickly for a wide-variety of conveying and rotation monitoring applications in automated processing and production.  For sheet or reel-to-reel measuring applications, such as papermaking or printing or on large-scale logistics conveying, the SICK DUV60 uses the same technology as the DUS60 combined with single or dual spring-mounted measuring wheels.

The DUS60’s DIP switch programmability enables up to 30 different resolutions to be selected according to application requirements, as well as signal output and counting direction.  Options of solid shaft, blind hollow and through hollow mechanical configurations are all available in the 60mm encoder housing.

Two on-board LEDs indicate at a glance the power and output status of the encoder during operation and an anti-dither function prevents false counting when the conveyor is halted and restarted.

Explains Darren Pratt, SICK’s UK Product Manager for encoders:   “The DUS60 and DUV60 set a mid-range technology benchmark between standard incremental encoders and fully-programmable devices.  Engineers can, therefore, reduce their encoder inventories with a level and ease of programmability that’s more than sufficient for many applications, without the need to invest in a fully-programmable option or use a programming tool or laptop.

“The DUS60’s anti-dither feature is particularly beneficial for conveyor belt installations where signal evaluation of just one encoder is commonly used.  In these installations, the rotational direction can’t be identified.  During belt stoppages there is a risk of the controller evaluating tiny belt movements caused by vibrations as a more significant movement.

“The DUS60’s anti-dither function registers the encoder stoppage then waits a longer period than normal before outputting a full movement pulse, improving the reliability of systems evaluating just one encoder channel, which could otherwise lead to production errors and downtime.”

The SICK DUS60’s rugged, IP65 housing is mounted with two LEDs to provide simple confirmation that the power is on and that the encoder is transmitting the motion data.

In addition to the LEDs, the encoder also offers an optional fault output for quick diagnosis by the PLC. The encoder is powered by a universal 4.5…30V supply voltage. The output can be selected as either as a 5V line driver (TTL) or a 4.5…30V line driver (HTL) using the DIP switches. The DUS60 offers flexible installation options through the rotatable M12 connectors with 4 or 8-pin configurations, or a universal cable connection.