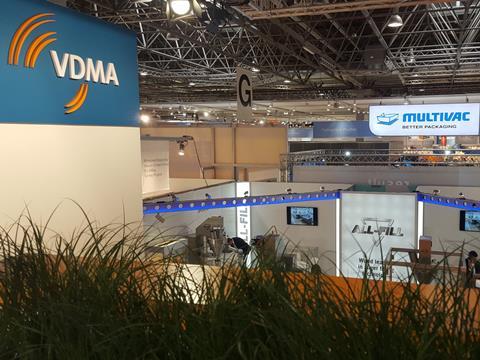 “For years, our industry has shown a positive development and the German manufacturers can look back on a record year," said Richard Clemens, Managing Director of the VDMA Food Packaging and Packaging Machinery Association, at interpack 2017 in Düsseldorf.

Last year, the companies generated machines and plants worth 13.3 billion euros, an increase of 2.4 percent compared to the previous year. "The current development of the industry is a good thing for us, so we expect a growth in sales of between 3 and 4 percent for the entire sector covered by the Food Processing and Packaging Machinery Association," Clemens added.

Demand from abroad is the driving force of the industry. A large proportion of German production is sold to more than 100 countries worldwide, last year’s exports amounted to 8.3 billion euros. This was an increase of almost 4 percent compared to the previous year.Europe still remains the most important sales region. In 2016, the German manufacturers exported food processing and packaging machinery worth 4.1 billion euros, equivalent to half of the total exports.

After Europe, Asia is the most important sales region for German food processing and packaging machinery. In 2016, machinery and equipment worth 1.4 billion euros went to Asian countries: 17 percent of German exports.

Increasingly it is the emerging and developing countries, whose industries need to be established, expanded or modernized, that give growth impulses. Here, production mechanization and the packaging of the products is often still at a low level. The potential of these markets is high due to population growth, a growing middle class with young people who are ready to consume and have increasing demands on the safety and quality of food and beverages.

"Smart Future" is the header under which the Food Processing and Packaging Machinery Association within VDMA gives partners from industry, research and development the opportunity to present their latest developments in packaging technology. The exhibits show ideas and solutions for tomorrow's machines.