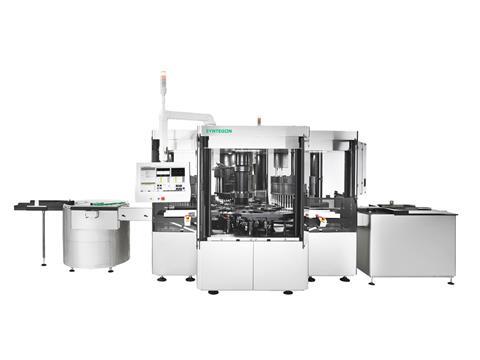 The company says that this installation constitutes a “major step” in its efforts to introduce AI to pharmaceutical visual inspection, thereby exploring largely uncharted territory in the industry.

“We are proud to announce this important move, which is the joint result of long-standing visual inspection expertise, solid software and pharmaceutical validation competence, courage to cross boundaries, and an excellent partnership with our customer,” says Dr José Zanardi, who oversees vision inspection development and applications at Syntegon.

It is Syntegon’s view that AI applications have the potential to further increase detection rates and decrease the number of false rejects in difficult products like highly viscous parenteral solutions with air bubbles, which are sometimes hard to differentiate from harmful particles. AI utilizes Deep Learning algorithms that are capable of accurately identifying recurring patterns and deviations.

“A growing number of Deep Learning vision applications are already on the market. Our task was to adapt those applications for pharmaceutical purposes, which essentially also includes validation,” Zanardi explains.

Syntegon says that, thanks to thorough in-house software and visual inspection expertise, it was able to develop a solution that only requires moderate modifications to the already existing vision systems.

After starting with the AI development in 2017 and performing tests, Syntegon recently installed its first AI-equipped visual inspection system in a fully automated and validated machine in a customer’s production line.

“This challenging project required a lot of dedication and expertise. In cooperation with Syntegon, we have implemented the world-first syringe inspection machine with AI and underline our market position, both in biotechnology production and in technology,” says Manuel Soto, Principal Process Development Engineer at Amgen.