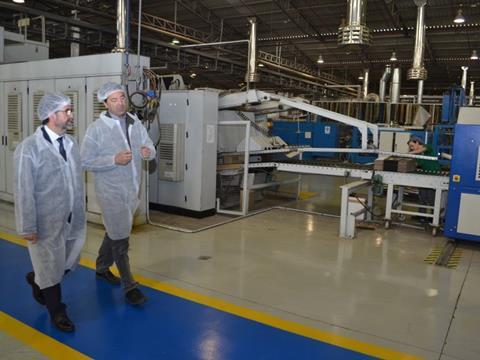 SAECO, a major Spanish manufacturer of corrugated cardboard, will soon put on the market an active intelligent packaging, which has been developed with the collaboration of researchers from Universidad Politécnica de Cartagena (UPCT, Spain). It improves the conservation of fresh fruits and vegetables during its distribution and transport and extends its shelf life by more than 30%.

This new active packaging –patented at an international level– has antimicrobial characteristics, which helps to control the development of both quality altering microorganisms (moulds and bacteria, which shorten the shelf life of these products), and pathogenic microorganisms such as Listeria monocytogenes and other pathogens that may be present in these food products. "It also has an antioxidant effect, so it reduces the alterations that imply colour changes or unwanted browning" says the researcher at this University Prof Antonio López Gómez, head of the research projects that have led to this invention.

"The packaging with this technology is intelligent because it only activates its antimicrobial agents and inhibitors of oxidative processes when the tray is loaded with fresh product, during the transport and storage of the product in cold rooms", says the professor of Food Engineering Department of this University. "The products used for its manufacture are natural and of zero residue", adds the professor of the UPCT.

"The patented technology can solve a very important problem of product losses when it is packed in conventional cardboard trays. It must be taken into account that in Spain fresh fruit and vegetable products use about 1500 millions cardboard trays each year. And many of these millions of crates are shipped with product to other countries. With this new cardboard tray the exporting companies will be able to take their products to more distant markets and in good conditions", says Juan de Vicente Sandoval, Commercial Director of SAECO.

The company can adapt the design of its new active cardboard trays to the needs of the client, which will have a similar appearance to the conventional ones, and will manufacture them so that their active properties adapt to each product. "A large part of agricultural production is marketed in cardboard trays, which facilitates its recycling", highlight SAECO, the regional leader in corrugated cardboard with an installed production capacity of 150 million m2, equivalent to more than 300 Millions of agricultural trays.

The development of this innovative packaging is perhaps one of the most remarkable results of the collaboration established ten years ago between the SAECO firm and the research group on Food Safety Engineering of the UPCT, led by Professor López Gómez. The Universidad Politécnica de Cartagena and the cardboard manufacturing company have jointly participated in two CDTI projects and a European Eureka project. Currently, the last phases of optimization of the manufacturing of this active cardboard tray –to be sold at a price as competitive as the conventional one– are being developed through a RIS3Mur program R&D project. The different possibilities of commercialization of this technology at international level are being analysed with the aid of a European Program H2020 - SME Instrument Project.