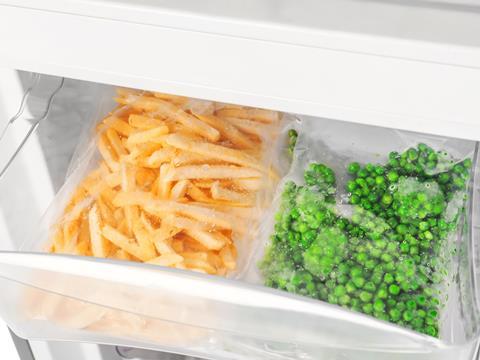 SABIC has collaborated with Syntegon, Ticinoplast, and Plastchim to launch a packaging solution for frozen food that combines a new polyethylene (PE) grade with innovative film production technology.

The company says that, when compared to conventional blow PE film solutions, the new solution offers “significantly higher” throughput and also has potential for down-gauging, making it attractive from both a commercial and sustainability standpoint.

The solution is based on a mono web TF-BOPE film structure which has a thickness of only 20 micrometers. This thin gauge reportedly provides a potential packaging material reduction of approximately 35-50% compared to incumbent blown PE film.

SABIC hopes that the reduced thickness of the packaging solution will minimize environmental impact and support brand owners and retailers who are aiming to reduce their packaging material consumption. The product is also recyclable in mono-PE recycling streams.

This new solution is the result of SABIC’s close collaboration with film suppliers/extruders Ticinoplast and Plastchim-T, as well as packaging machine manufacturer Syntegon Technology.

Stephan Eltink, SABIC’s business director for PE in Europe, said: “By working closely with Ticinoplast, Plastchim-T, and Syntegon, and by leveraging our innovation together, we have been able to introduce a new solution to the market that allows for more sustainable packaging without any compromise on productivity and consumer convenience.”

Pierre Hamelink, Syntegon’s director of business, market, and sustainability strategy, added: “This innovative packaging solution demonstrates the true value of collaboration. Stakeholders throughout the supply chain have had to work together to bring this to life: sustainability cannot be achieved single-handedly.”

The 20-micrometer thin film was successfully tested on Syntegon’s vertical form, fill and seal machines, which feature the newly-developed PHS 2.0 sealing technology. This technology apparently reduces the amount of clamped film by 25% and increases packaging speed by up to 25%.

The thin TF-BOPE film also requires less cooling time which, according to SABIC, increases packaging speed even more. During the evaluations, a constant speed of 130 bags per minute was reportedly achieved.

TF-BOPE has the potential to be used in new applications and markets which support the circular economy, where mono-material solutions are required to enhance recyclability. SABIC says that TF-BOPE can replace multi-material laminates into a mono-PE structure.