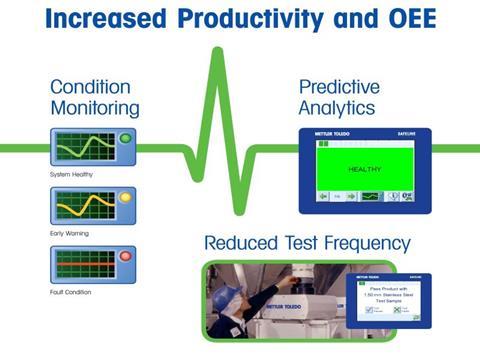 Using technology based on a Predictive Analytics framework, manufacturers can significantly reduce the frequency of routine performance tests, and benefit from improved operator and production line efficiency. Leanne Peasnall, Head of Marketing at Mettler-Toledo Safeline Metal Detection, reveals how.

The first of the two key features is a software enhancement called Condition Monitoring that was developed as a preventative maintenance tool, developed within a Predictive Analytics framework. The metal detector monitors its own performance and functionality and if a change in performance is detected, an early warning alarm is activated to alert the operator. The key factor is that the alarm will sound in advance of a potential failure developing within the system, enabling maintenance engineers to rectify the problem quickly and helping manufacturers avoid costly and unnecessary downtime.

The technology has been developed further in the form of Reduced Test mode, which ensures the metal detector is always working to or better than the required specification. In doing so, a safety net is built in. Once Reduced Test mode is activated, an alarm will notify personnel via an on-screen message when any change in sensitivity is identified and, importantly, well before the system drops below the set specification for the line on which it's operating.

How and why metal detectors are tested is well documented and understood. Testing provides reassurance that systems are operating in accordance with the specified sensitivity for the product they are inspecting and accurately rejecting products containing metal contaminants. It also provides reassurance that any sensors employed as part of the detection/rejection circuit are set up and functioning correctly. However, most manufacturers test their detectors far more frequently than necessary, which can have a detrimental effect on their bottom line. On average most test at intervals of somewhere between one and four hours but, for the purposes of this article, let's take a recent customer example – a snack food manufacturer - and imagine that testing is undertaken every two hours.

The majority of snack foods are not shipped sooner than 24 hours after they're manufactured, which begs the question – why are tests carried out at such regular intervals? Perhaps it implies that incidences of test failure are very high and as such manufacturers would rather test at high frequencies and re-test small batches that have been quarantined, rather than have to manage the re-inspection of a full 24 hour production run. However, when looking at food producers worldwide, we don't notice large stocks of product lined up ready to be manually re-tested by the metal detector due to a prior test failure. This tends to suggest therefore that the occurrence of test failure is in reality not that high.

A further explanation is that testing has been conducted like this for many years. The first metal detection systems displayed stability and reliability that was average at best and the test failure rate was so high it was deemed necessary to test on a very regular basis. This mentality hasn't altered and a good reason to change the status quo hasn't been articulated effectively before now.

Like many food manufacturers, the snack manufacturer had established an OEE improvement programme to review its production line equipment with regards to lost efficiency. It discovered that the metal detectors were the most reliable systems in its factory. Feedback suggested they rarely broke down and simply carried on doing their job day-in day-out, which made them an unlikely candidate for OEE improvement activity.

However, during the review, it was noted that the method used to test the detectors, along with the frequency, was having a negative impact on OEE. Every couple of hours an operator would climb up to a mezzanine floor and drop a metal test object into the weigher, which would then be delivered to the metal detector. This, having detected the piece, would stop the bag-maker which would then stop the line. A second operator on the ground floor would then remove the bag containing the test piece, reset the bag-maker and restart production – the entire process was carried out three times (for three different metal types) at every two hour test interval.

We worked out that this procedure took approximately three minutes (six man minutes due to the multiple operators involved) plus the time it took to document the results which, if you do the calculations across the 24 metal detectors in operation, means the customer was employing two operators all day, every day just to test the systems. Depending on your labour costs this alone could have a significant financial impact. The sting in the tail was that the test regime stopping the line for three minutes each time led to lost production totalling 300 packs. Multiply this by 12 times a day across the company’s 24 lines and an astonishing 86,400 bags per day were lost due to metal detector testing (assuming a plant efficiency of 70%).

By utilising metal detectors equipped with Reduced Test mode, manufacturers can significantly reduce the frequency of routine performance testing. This is because unless the alarm sounds to indicate a potential issue with the system, there's no need to halt production to conduct regular performance monitoring checks, subject to the on-site quarantine period, which in this case was 24 hours. We recommend that at least one complete manual performance check is conducted within the quarantine period, to test the performance of the reject system.

After witnessing a demonstration, the customer changed to the new format and was immediately able to reduce its testing regime from every two hours to every 12 hours. The reduction in testing frequency and the knowledge that all product had passed through the detector within the required specifications resulted in an immediate financial payback through greater productivity and dramatic OEE improvements.

Complacency is no longer an option for manufacturers in today's highly-competitive marketplace. Continuous improvement is vital to increase your bottom line without compromising on quality and safety. An OEE improvement programme is an excellent starting point as it will reveal how the latest technological advances could benefit your company.

By unlocking the efficiencies that lift OEE and production line profitability, metal detectors equipped with Reduced Test mode can play a key role in helping manufacturers get closer to achieving world-class OEE upwards of 80%.