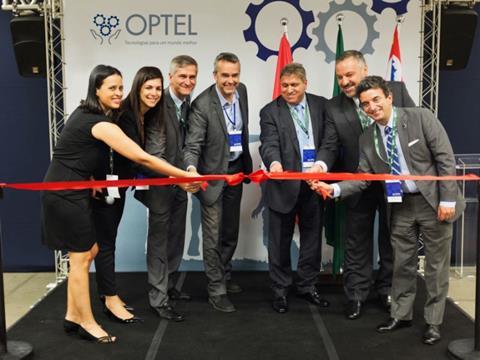 OPTEL GROUP, a leading global provider of traceability systems for the pharmaceutical and medical device industries, has announced that it officially inaugurated its new manufacturing facilities in Campinas, Brazil.

After a successful expansion at its Canadian headquarters, as well as recent sites in Ireland and India, OPTEL has added Brazil to its list of worldwide locations. This addition will allow the company to better meet growing serialization demand and keep supporting the fight against counterfeit pharmaceuticals and medical devices throughout the world.

Brazil is key to OPTEL’s mission as the country is not only a major producer of pharmaceuticals, but is also in the process of implementing pharmaceutical serialization legislation, which is perfectly aligned with OPTEL’s expertise and solution offering. In addition, being the most developed economy in the area, Brazil is an excellent entry point into the Latin American market. We decided to open a new site in São Paulo, more specifically in Campinas, because of the quality of the local infrastructure, which will help optimize our operations.

“Our new plant in Campinas, which is almost 1200 m2, will allow us to increase production, now and in the future, because the site also offers us the possibility of expanding our facilities by more than double later on,” says Louis Roy, President of OPTEL. “And thanks to the strong technical skills of the local workforce, our facilities in Campinas will be able to serve the entire Latin American region in terms of sales, production and system implementation,” adds Amanda Neves, Plant Manager in Campinas.

The official inauguration ceremony, which was also followed by a guided tour of the new manufacturing facilities was a great success and included several noteworthy guests, such as Riccardo Savone, Canada’s Ambassador to Brazil, Stephane Larue, Consul General of Canada in São Paulo, José Luiz Ribeiro, Secretary for the São Paulo province, and André Von Zuben, from the Department of Economic Development in Campinas.

The event was hosted by OPTEL President, Louis Roy, who also highlighted OPTEL’s humanitarian values, as this socially responsible company also supports various local charities in all its locations. In Brazil, OPTEL is working with Fundação EUFRATEN ─ a non-profit organization that helps children and teens, teaching them how to become better citizens and helping them develop their potential to provide them with better job opportunities.

OPTEL’s Recent SuccessOPTEL has had tremendous success over the past few years. In fact, sales and revenues have increased 1000% and the company was recently named the leading provider in its field with 25.7% of the global market share.

Moreover, since 2014, OPTEL has hired over 500 employees worldwide, and this trend will continue for the Brazilian location, as the company aims to hire an additional 100 direct employees there. Campinas itself will also benefit from organization’s presence because OPTEL plans to contribute to the development of the region by prioritizing local suppliers, which will also create indirect work for an estimated 400 people.