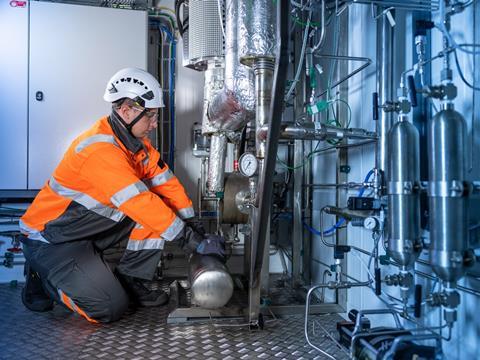 VTT’s Forest CUMP project is aiming to use captured CO2 from waste incineration and the forest industry in the production of polyethylene and polypropylene, with future process concepts hoped to expand the process into other industries at a commercial scale.

The project, launched in August 2022, builds upon VTT’s previous BECCU project, which sought to capture and utilise carbon dioxide to produce raw materials for polyurethane products including insulation materials and industrial adhesives. This time, VTT is utilising the hydrocarbon intermediates developed in BECCU to focus on the production of PE and PP.

With the project’s sights set on the development of a process concept and the construction of a small-scale test plant in 2024, it is hoped that the technology could eventually reach industrial scale.

“We can utilise the results of the test plant in the development and design of an industrial-scale plant,” says Juha Lehtonen, research professor at VTT. “In addition to technological development, we are studying the applicability of different sources of CO2 and methods for capture and purification of CO2.

“We are also looking into the logistical angle linked with the transport and storage of the feedstocks – carbon dioxide and hydrogen – and the intermediate products – hydrocarbons.”

As part of Business Finland’s Veturi ecosystems, various companies are collaborating to carry out the Forest CUMP project – including Borealis, for whom the project fits into its goal of a green transition in the plastics industry through its SPIRIT programme.

“This is a significant development project that supports our vision, in which the carbon dioxide emissions from industry could be utilised for the production of e.g. durable plastic pipes out of them, which can bind carbon for long periods of time”, says Antti Ilves, key account manager at Borealis.

Mibelle Group made it to the finals of the 2021 Sustainability Awards by implementing 30% captured CO2 into its PET bottles, making use of carbon capture technology from LanzaTech.

However, we also spoke to Dr Hydra Rodrigues, technology analyst at IDTechEx, about the current state of the capture and utilisation industry. She told us that questions still remain about whether the process even leads to emissions reductions, and what the exact practical and financial roadblocks in pursuit of its large-scale implementation might be.