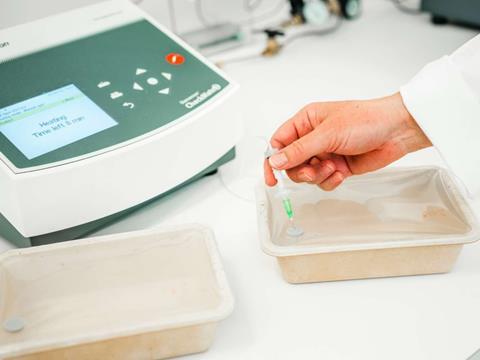 The Danish Technological Institute (DTI) and CelluComp have developed Curran, a fibre-based material for packaging that is made of micro-fibrillated cellulose from sugar beet pulp and an ultra-thin biodegradable coating that reportedly blocks oxygen, water, and fat.

The packaging, called Curran, is a result of the collaboration between the Danish Technological Institute and Scottish-based CelluComp. The packaging is based on fibres extracted from sugar beet, and the organisations claim it is compostable and biodegradable.

Christian Kemp-Griffin, CEO of CelluComp, explains: “We have developed a method for extracting micron-sized platelets from the sugar beet pulp (a co-product stream from sugar production), which we call Curran. After this process, we produce a product that is in granular form – similar to grated cheese.

“Curran is particularly suitable for paper-based packaging because it makes the packaging significantly stronger and closes the porosity of the sheet, enabling the application of water-based barrier coatings.”

DTI says it has developed special moulds for the new packaging, which allows the mass to be moulded into cups and coated with an ultra-thin coating that is apparently biodegradable. The organisations claim that the coating blocks oxygen, water, and fat.

The organisations note that when using traditional kraft pulp, a phenomenon called “fibre lift-up” or “dusting”, where individual fibres tear loose and protrude through the thin coating, takes place on the surface. According to Germann: “We have developed a new pulp, which we call NEST, that consists of both ordinary cellulose fibres and Curran.

“This helps us solve the problem and utilize the full potential of the coating. The interaction between the two building blocks eliminates the problem of fibre lift-up, and we now have a packaging solution that is completely tight and food-approved.”

While the organisations say that the fibre-based packaging could potentially be sorted and recycled as paper in the future, it is not currently sortable in Danish sorting plants at present.

Germann says: “In the near future, it is expected that the sorting plants will be advanced enough to categorize the packaging as paper.

“This is groundbreaking, as paper-based food packaging such as milk cartons are usually coated with either a thin layer of plastic foil or wax, which makes them unsuitable for paper sorting.

“We expect that the new type of packaging can replace up to 10,000 tonnes of plastic packaging for food with 8,000 tonnes of recyclable and biodegradable paper packaging in Denmark. This means a CO2 saving of more than 20,000 tons per year.”

In addition, Curran can reportedly be used in other products outside of packaging, such as thickener in paints, home or personal care products, or as an additive in food to reduce sugar and fat.

Kemp-Griffin concludes: “We have learned a lot from each other over the past four years. Danish Technological Institute has brought strong competencies into play, provided equipment and been open and focused throughout the collaboration. In particular, their facilities within pilot production have been crucial in reaching our goal.”