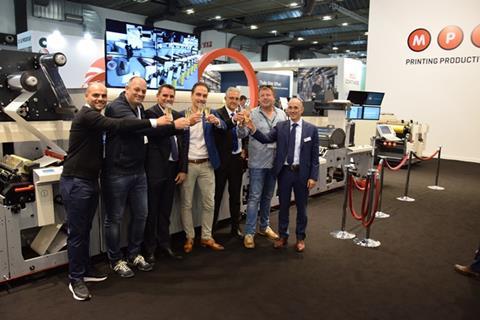 MPS accomplished a successful Labelexpo Europe with the successful launch of their innovative ‘talk to me’ connectivity platform and two signed orders for the hybrid EF SYMJET.

Crowds of visitors on the MPS stand received live demonstrations of the ground-breaking ‘talk to me’ connectivity concept on the EF automated multi-substrate flexo press and the hybrid flexo/digital EF SYMJET press developed with Domino. A second fully equipped MPS EF press was also demonstrated live at the debut of Automation Arena, that featured two automated press lines for digital and conventional label production, from job creation through to pre-press, printing, finishing and invoicing.

Wim van den Bosch, CEO of MPS said: “We believe that ‘talk to me’ is the future. Communication is no longer restricted to just people, but also between machines and among humans and machines. ‘talk to me’ is more than just reading information from the MPS press; it also requires interaction from the operator. With the increased difficulty in finding and retaining skilled operators,  ‘talk to me’ automates the process as much as possible, to guarantee high quality print results and productivity.”As another “Operator Focused, Results Driven” MPS innovation, ‘talk to me’ is a system of open communication between all software and equipment on the print shop floor, giving printers and converters the opportunity to maximize efficiency in their printing process. MPS partnered with key partners from the industry including CERM, Labeltraxx, AVT, Esko, and Apex that were a part of the automation process shown at Labelexpo, however ‘talk to me’ is an ongoing development initiative and open to other partners and their automation solutions.

Double hybrid sale at LabelexpoIn addition to the signing of several other contracts, MPS celebrated a double sale of the hybrid EF SYMJET at Labelexpo. EF SYMJET, the combination of MPS’ EF flexo press with Domino N610i inkjet technology, is a fully integrated hybrid press that can run up to 75 m/min in hybrid printing mode.

The first contract was signed by Etikettendrukkerij Noord Nederland (EDNN) a printer based in Hoogeveen, and the first in the Netherlands to purchase the EF SYMJET. Vincent Belksma, General Manager at EDNN said: “We were looking for a versatile press that could print perfect quality, especially on shorter runs. This hybrid printing solution from MPS and Domino with in-line finishing fits our needs perfectly and is a great addition to our machine park.”The second bottle of champagne popped for DWS Printing from Deer Park, New York, USA. Established in 1865, DWS Printing is now managed by the fourth generation, brothers Tom and Andy Staib.

The purchase of the hybrid EF SYMJET marks the first MPS press for the New York-based company. The Staib brothers visited the Technology and Expertise Centre at the MPS headquarters in Arnhem earlier this year for live demonstrations and signed for their own press at Labelexpo.

Eric Hoendervangers, co-founder and Commercial Director at MPS was thrilled with the successful sales: “When we introduced the EF SYMJET at Labelexpo Europe 2015, we knew the market needed time to get used to the idea of hybrid printing. With the sale of two presses at the show, marking the first in The Netherlands and the second in the USA, our customers have proven to be ready for the future.”