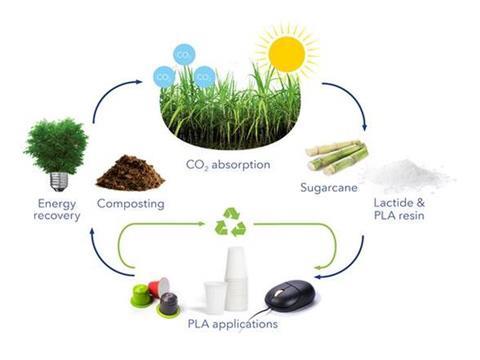 Total Corbion PLA's peer reviewed Life Cycle Impact Assessment of PLA (Poly Lactic Acid) produced from Sugarcane in Thailand has been published in the "Journal of Polymers and the Environment" and confirms PLA's low carbon footprint, the company has announced.

"From a cradle-to-gate perspective the Global Warming Potential (GWP) of PLA is confirmed to be only 500 gram CO2 /kg of PLA" says François de Bie, Senior Marketing Director at Total Corbion PLA, "which is roughly a 75% reduction in carbon footprint versus most traditional plastics."

PLA is a relatively new and innovative biopolymer and significant further reductions in the environmental footprint can be relatively easily achieved through improvements in the sugarcane farming, efficiency increases in the various production steps and the usage of renewable energy in the conversion process. De Bie "It is likely that in 10 years from now the cradle-to-gate GWP for PLA will have been reduced from plus 500 to minus 900 gram CO/kg PLA."

Fresh water usage is another important environmental impact category which was included in the study. "The sugarcane plantations  where we source biomass needed for the PLA production have very limited irrigation and are located in areas of low to medium water stress" according Ana Morão, Principal Scientist Sustainability at Corbion.

On request of Corbion, GRAS GmBH conducted satellite imaging of the sugarcane plantation areas which was combined with the mapping of high carbon stock  and biodiversity protected areas.  This study lead to the conclusion that Corbion’s sourcing areas did not show significant land transformation.

The full LCA article is available on our website or can be found in the November 2019 edition of the "Journal of Polymers and the Environment" volume 27 issue 11, published by Springer nature.