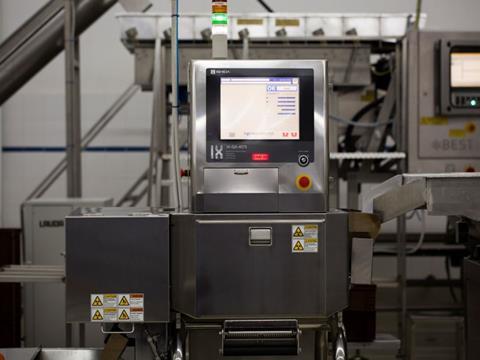 Based in Izmir, Anatolia supplies a wide range of products, including sultanas, raisins, apricots, dates, figs, currents and dried mixed fruit, which are exported worldwide.

The rising popularity of pre-packed dried fruit has increased the demand from supermarkets for more stringent inspection procedures from their suppliers. This has been met by Anatolia through the introduction of inspection technology such as laser sorting and x-ray systems, in order to remove or minimise fruit stems, broken pieces or out-of-spec sizes, and to identify discolouration.

However, the most critical food safety objective is to identify and reject any foreign bodies such as stones, glass, metal and plastic which are often accidentally introduced into the supply chain during the harvesting and sun-drying, or during the logistics process that brings product to Anatolia’s pack house from a large number of orchards and vineyards.

When one of Anatolia’s biggest customers requested improved sensitivity levels and more reliable inspection capabilities, in particular to detect 2mm stones in raisins and sultanas supplied in bulk to Japan, the company was advised by this customer to look at Ishida X-ray inspection equipment which had already acquired an excellent reputation for high inspection performance levels.

Importantly Anatolia already had first-hand experience of the capabilities of Ishida equipment, having installed five Ishida multihead weighers and nine checkweighers since 1998.

The availability of a stock machine allowed Anatolia to assess the Ishida IX-GA-4075 in its own factory.  Initial test results demonstrated the system’s reliability in particular in detecting 3mm glass, 2mm stones and 1mm metal pieces.

After a subsequent adaptation of the machine to a bulk specification (including a suitable reject system and guarding), the IX-GA-4075 was installed on the bulk packing line with the specific objective of carrying out a final product inspection in order to detect any last foreign bodies that may have ‘’slipped” through the upstream inspection process.

The Ishida X-ray system has proved itself to be a reliable inspection solution. The bulk line is running at around 4-6 tons per hour in single 8 hour shifts and in 2-shift mode during peak production times such as Christmas and Easter, and the IX-GA-4075 enables Anatolia to consistently detect smaller mineral stones, glass and metal.

“The Ishida X-ray system is well designed and materials used on the equipment are durable, while product changeover can be carried out in a matter of minutes,” comments Anatolia’s project manager Koray Oz.

“The software is both user-friendly and stable, allowing operators to navigate with ease through product settings and enabling line engineers to quickly carry out fine adjustments.”

“As much as laser sorting technology has been a ‘game changer’ for us in the early days of our production, so has X-ray technology more recently proved to be a game changer in terms of food safety and brand protection.  More importantly, we have been pushing Ishida engineers from day one to find even smaller low density contaminants and we are now working with the company to find the next game changer in food inspection technology.”