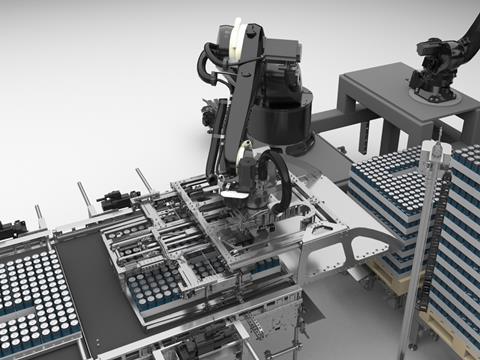 In the latest edition of The Spotlight, KHS Group presents its new Innopal PLR technology, combining high output with robotic operations to create a safe and efficient alternative to traditional palletizers.

With the help of modern robots, KHS has brought low-feed palletizers up to speed – whether they process cans, PET, or glass. For beverage fillers, this means easier operation, greater efficiency, and higher availability. The development of KHS’ new Innopal PLR high-performance palletizer was sparked by the idea of combining the benefits of low-feed machines with the capacities provided by palletizers with a high infeed. In this context, the chief question was how efficiency could be improved over conventional systems.

When palletizing with a low-level infeed, the cross conveyor that places the packs from the conveyor belt onto the stationary pallet gradually moves up from the initial feed height with each new layer positioned – and then back down again to pick up the next layer. If no further measures are taken, traversing these considerable distances limits capacity to about 360 layers per hour. Higher outputs can be achieved if the amount of time needed for pallet changeovers is reduced, for instance. This is the case with the KHS Innopal PB NF palletizer, to name one example, which can process up to 500 layers an hour. 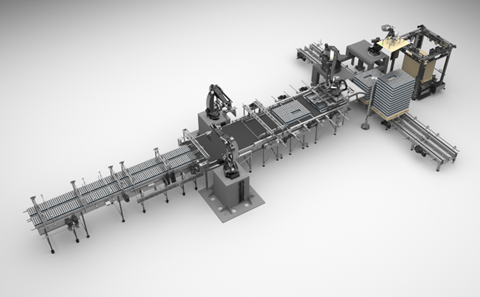 Until now, beverage companies requiring an even higher processing rate had to opt for a palletizer with a high pack infeed – where the pallet travels, however, not the cross conveyor. At the start of layer placement, this is at the height of the infeed – usually three meters above the shop floor. With each finished layer, the pallet slowly moves down. This vastly shortens the distances of travel and thus the cycle time, enabling capacities of up to 750 layers per hour, such as with the KHS Innopal PB HSS. Once the pallet is full, it has to be discharged from the machine before a new pallet can be brought up to the level of the infeed. 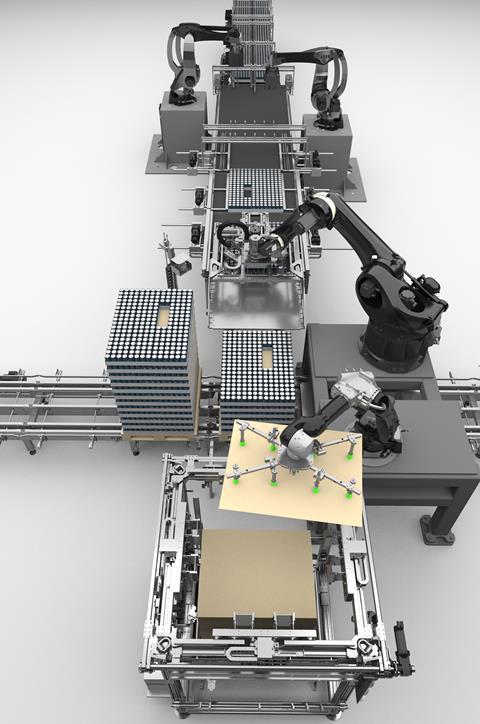 Palletizers with a high feed are becoming more and more unpopular on the market for a number of reasons, however. One of these is that they need two operating levels – one at the bottom for pallet conveying and one at the top for the pack conveyor. This calls for a platform accessed by steps with all the occupational health and safety risks this entails. When the operator is at the top of the system, he or she usually has no way of seeing what is going on down below. There is also the added difficulty of packs having to be brought up to the level of the infeed. A long elevator or spiral conveyor can be used to this end. Like the platform itself, both incur considerable costs and take quite a long time to install and commission.

With this in mind, KHS customers are increasingly asking for palletizers with a low infeed to reduce their investment costs and increase safety levels. Here, most competitors tend to optimize their conventional technology to increase outputs. With its new Innopal PLR high-performance palletizer KHS has consciously gone for a different approach, relying entirely on robotics. The team of developers has now created a scenario whereby up to 625 layers can be palletized per hour – which amounts to a nominal capacity of 135,000 cans an hour maximum, depending on their diameter.

For this purpose, KHS first positioned all elements in the palletizing cell so that the robot has an excellent radius of movement. Secondly, they redefined the descriptions of movement to permit higher speeds. KHS also coordinated these movements with a second robot that inserts layer pads.