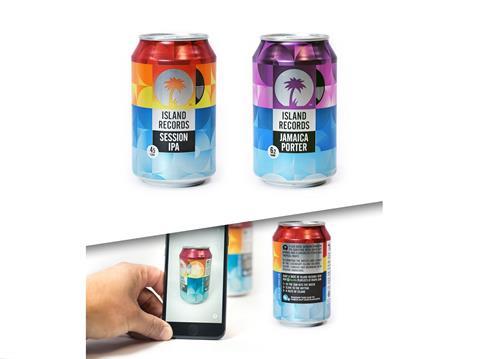 The iconic record label Island Records has partnered with Crown Bevcan Europe and Middle East, a business unit of Crown Holdings, Inc., to launch the world’s first “Shazamable” can for its Session IPA Beer.

This collaboration was recognised at the Annual World Beverage Innovation Awards, held in September at Drinktec in Munich, Germany, where the range won Best Can or Alubottle. A stage for the most ambitious new products and developments launched by international companies during the year, the Awards are known for showcasing upcoming trends in the food and beverage industries.  Island’s collaboration with Crown leverages consumers’ propensity to truly explore the packaging of their favourite products and the story behind the brand. That story is one that goes beyond the ingredients used to include who made it, where it was made and why. In fact, this curiosity mirrors how a music lover picks up a vinyl album with amazing artwork and reads the liner notes to discover the back story to the album.

To help their Session IPA stand out in a crowded market, Island Records worked closely with Shazam to innovate with their “Visual Shazam” technology to enable consumers to connect instantly with three curated bespoke playlists featuring Island artists on Spotify, accessible by scanning the Shazam Code on the can with their smartphones.

Crown’s European Design Studio in Leicester (U.K.) worked on pre-press activities with Zappar, which provides the technology behind the Shazam Codes, to embed the dedicated logo into the final design. Crown experts then used their experience to translate the fine details into a design that could be printed directly onto a cylindrical beverage can.

Both Crown and Island Records have a history of creativity and innovation within their respective fields, and this collaboration has produced a world-first to the craft beer market. The cans are produced at Crown’s Braunstone (UK) factory. A second design, for Island Records Beer Range Jamaica Porter, has already been launched alongside the Session IPA.