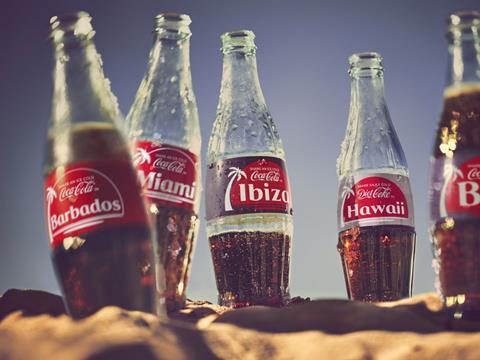 Coca-Cola European Partners is bringing back its award-winning Share A Coke campaign but with a summer twist. Launching this May, the iconic logo on bottles of Coca-Cola, Coca-Cola Zero Sugar and Diet Coke will be replaced by the names of the world’s top holiday destinations.

From famous cities to exotic beaches, the limited-edition packs are designed to remind consumers of the refreshment and great taste that only an ice-cold Coke can bring on a hot summer day. And those purchasing a destination-themed Coke could also win an unforgettable vacation to a dream holiday hotspot.  With destinations including Hawaii, Bali, Ibiza and Miami, consumers can take part in the promotion by entering a unique code found on pack at coke.co.uk/summer. Winners will win a dream holiday for four to the destination of their choice and there will be a winner drawn every day during an eight week period from 10 May until 9 July.

The on-pack promotion and iconic packaging design will be supported by a significant marketing campaign that includes TVC, digital OOH, social media, PR and influencer campaign.

The new summer TV commercial called Pool Boy sees Coca-Cola build on its legacy of uplifting adverts, with a family who are all equally impressed by the handsome pool boy. In the humorous ad, they all race to serve him an ice-cold glass bottle of Coca-Cola on a hot summer day but they’re beaten by one surprising family member. The ad launches at scale on TV, in cinema and online from the 19 May. It’s already one of the brand’s most popular TVC’s to date, achieving over 3.5m views on Youtube in just three weeks.

Coca-Cola will also undertake its biggest UK sampling activation ever, giving away 11 million 150ml samples of Coca-Cola Zero Sugar in cities and festivals throughout the UK.

The summer campaign continues under the broader creative umbrella of ‘Taste the Feeling’ which was launched last year and brings to life the idea that drinking any Coca-Cola is a simple pleasure that makes everyday moments more special. People can join in the conversation by sharing their Coca-Cola summer experiences to #TasteTheFeeling.

Simon Harrison, Operational Marketing Director at Coca-Cola European Partners, GB said: “Share A Coke was a global phenomenon which took product personalisation to the next level. The 2014 campaign earned a number of awards and mass-scale engagement with our customers online and in-store.  This year, we are building on its success by reminding people in GB why Coke makes summer more special; while giving them the opportunity to share a Coke with loved ones in some of the most desirable locations across the world. To support the iconic packs, we will be investing £10m in marketing which includes our biggest sampling drive yet, an extensive digital campaign, a new TV creative, outdoor and PR.”

The campaign will feature across a number of countries in Europe and will kick off in GB in May.