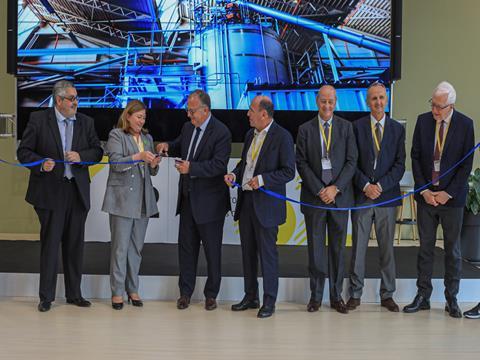 Biochemistry company Carbios has opened an industrial demonstration plant as part of the commercialisation of its enzymatic recycling technology, C-ZYME, and says that initial tests reflect the scalability of the process.

The industrial demonstration plant was installed on the company’s Cataroux site in Clermont-Ferrand, France. It is aimed at testing and commercialising Carbios’s enzymatic solutions for “reinventing” the lifecycle of plastic and textile polymers.

In particular, the plant will reportedly allow for the validation of Carbios’s C-ZYME technology, which uses an enzyme capable of depolymerising PET. The depolymerized enzyme monomers are then purified, before being repolymrized into PET of comparable quality to virgin PET derived from petrochemicals.

Jean-Claude Lumaret, CEO of Carbios, says: “The demonstration plant includes a 20m3 depolymerization reactor capable of processing 2 tonnes of PET per cycle, which is the equivalent of 100,000 bottles.

“This is a watershed moment, highlighting how this revolutionary process works on a large scale.”

The optimisation of the operating parameters and the production of the monomer batches for the C-ZYME process is now being overseen by a team of 10 people at the new Carbios plant.

In addition, the company says that an initial hydrolysis has been successfully realised, which apparently confirms that the C-ZYME technology can be scaled up.

A delegation from the Suntory Group, which has been working with Carbios to develop its enzymatic PET recycling technology since 2019, attended the opening of the new industrial plant in Clermont-Ferrand. A member of the Carbios Consortium, the group launched an Orangina bottle apparently made from enzymatically recycled plastic earlier this year, which it says is a global first.

Other members of the Carbios consortium include Nestle, which unveiled the prototype of its rPET Perrier water bottles based on the enzymatic recycling technology earlier this year, and PepsiCo, which views the collaboration as a key part of its sustainability initiatives.