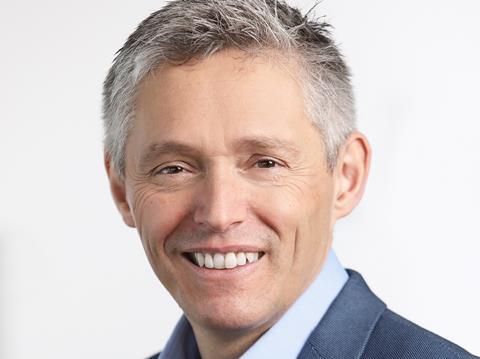 Chemical recycling: its potential to bring us ever closer to that goal of circularity is widely acknowledged. But we’re not quite there yet. Victoria Hattersley talks to Tim Stedman, CEO of advanced recycling specialist Agilyx, about the most logical routes to achieving this goal.

It’s not hard to comprehend why there’s such a sustained level of anticipation around chemical recycling. Through this emerging technology, which allows plastics to be broken down to their original molecular building blocks, those polymers that are currently difficult or uneconomic to recycle mechanically could in future become a viable part of the circular economy.

Yet we’re all still waiting, in a sense, for the party to start. That’s why in my conversation with Tim Stedman, I was not so much interested in the whys – we all know about those by now – as the hows. What needs to be done for chemical recycling to really fulfil its undoubted potential?

‘The right waste in the right direction’

The chemical recycling method developed by Agilyx over the past decade and more leverages two core elements for creating ‘truly circular pathways’ for mixed waste plastic: conversion technology, combined with feedstock technology. The latter has been developed through Cyclyx, a joint venture with Exxon Mobil announced last year, that will develop ways to aggregate and process waste plastics.

“We believe if chemical recycling (or advanced recycling, to use an interchangeable term) is going to work then it will be through an understanding of the molecular fingerprint of the feedstock – e.g. mixed plastic waste – and how that interacts with conversion routes; in our case, the processes we are developing through Cyclyx and Agilyx,” says Tim.

So it’s not a simple case of going to a waste company and taking all their mixed waste?

“No, the feedstock is absolutely crucial, it involves a level of complexity that goes beyond just having available waste. If you can’t go down to several layers below that then it’s not going to be cost-effective. Because one of the huge advantages of chemical recycling is that you don’t need all the expensive pre-processing steps you get with mechanical recycling – grinding, cleaning, etc. It’s about finding ways of dealing with waste so that it’s optimized for chemical recycling. We need to make sure we have the right waste going in the right direction.”

‘Not all chemical recycling technologies are created equal’

“There is nowhere in the world where waste systems have yet comprehended the requirements of chemical recycling. It [the infrastructure] does not exist in any kind of refined format. That is what Cyclyx brings. We can leverage our 10-15 years of working with different waste, organizing different materials and understanding how they interact at a molecular level with conversion processes.

“Over the years as we’ve refined our technology we’ve learned about the pitfalls. To give just one example, our technology, unlike some others, does not use a catalyst. Now, catalysts can be great in many cases, but the issue is that a catalytic system doesn’t like waste and the various contaminants of concern that typically come with it. So if you have a catalysed system you’re essentially restricting the type of waste you can bring in. Our system is very robust against contaminants of concern, which can allow users to take in a much broader spectrum of waste. It’s also electrically heated so you can link it to renewables and dial in the exact heat to get the chemistry you need.”

The anticipated use of chemical recycling on a global scale may also help to deal with some of the more granular challenges faced by different sectors of the packaging industry. For example, the negative perceptions around polystyrene (PS); as we have recently highlighted, there is still a widespread perception that it cannot be recycled – when in fact the reality is quite the reverse.

I was interested to talk to Tim about this subject because, as it happens, aside from the Cyclyx project, Agilyx has also been working with AmSty, through a 50/50 joint venture called Regenyx, to use its pyrolysis technology to convert PS back to its raw form, creating a fully circular pathway for PS recycling.

“Yes, the industry has long recognized it needs to address the negative press around PS. The reality is, it is recyclable and in fact from a chemical recycling perspective it arguably has one of the most direct routes because it’s quite straightforward to take polystyrene back to styrene, its precursor feedstock. So you could, for example, put contaminated, low-end PS products like plant pots through our system and upgrade them to food-grade PS – the ultimate goal for all recycling technologies.”

Of course, Agilyx’s is just one example of a promising chemical recycling solution. As Tim has already mentioned, there are many others – and there’s room for plenty more at the party. This isn’t an exclusive gathering; indeed, it’s frankly a case of the more the better as long as they are effective.

“The market is so huge that I’m confident there will be space for lots of solutions to have their part,” he says. “There is certainly not going to be a simple solution that addresses all of the complex challenges. What is important is that we, collectively, ensure that we treat these molecules like gold dust; we shouldn’t just throw them away, but view all plastic as something to be used again and again.”

And in those cases where plastic isn’t necessary at all? “Don’t fight it. Use something else. We need a very honest conversation around those things.”

“With chemical there are still plenty of people asking: Will it work? The only way to address this is through demonstration and that’s what we’re doing.”

But finally, let’s reiterate – not all these technologies are created equal. In the future, when we really begin to see the results of the coming recycling revolution in our daily lives, we may come to a point where the real issue becomes not proving the technology, but in weeding out the ‘good’ from the ‘bad’. Perhaps very much in the way that we are continuously sifting through ‘greenwashing’ claims around packaging formats here at Packaging Europe Towers (for that, read ‘our respective home offices / bedrooms’). But that’s another article altogether.