A Milk Capsule that Dissolves in Hot Drinks 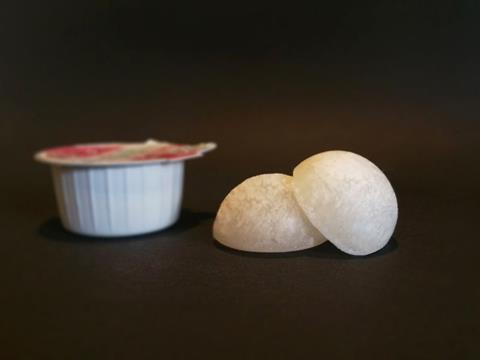 The new milk capsules are basically sugar cubes filled with milk or condensed milk. "Thanks to their sugar crust, the capsules have a packaging that dissolves easily in hot liquids," says Martha Wellner, who developed the method as part of her doctoral thesis at the former MLU Centre of Engineering under Prof. Dr.-Ing. Joachim Ulrich.The production of the capsules is relatively simple: First a solution of milk and the desired amount of sugar is prepared and put into a mould. Then the solution cools down. The excess sugar migrates to the edge of the liquid, where crystals form. On the inside of the capsule, there is a milk-sugar solution. In several experiments, Ms Wellner investigated which substances and which cooling processes yield the best results.

There are currently two variants of the milk container available: one sweetened and one slightly sweetened. The researchers are still working on an unsweetened capsule. The capsules can be produced in various shapes and stored at room temperature. Once encapsulated, the milk keeps for at least three weeks. "Our process can also be used for other liquids. For example, we can encapsulate fruit juice concentrate," Wellner explains.

The idea for the encapsulation process came to Joachim Ulrich years ago. His research group had  been investigating the processes of crystal formation and how these can be used industrially, for example in the production of tablets. "In other doctoral theses we have already researched other encapsulation methods, but with different objectives," says Ulrich. The potential benefit of the new environmentally friendly development is great: "The capsules are intended, for example, as a possible alternative for the small packs of coffee cream which are available in large numbers but can be impractical. for example at conferences or in airplanes.

The scientists applied for a patent for this process in 2015. As yet, there is no final product, as checks are needed whether the concepts meets all the requirements for foodstuff regulations and whether the milk capsules can also be produced in large quantities at low cost.