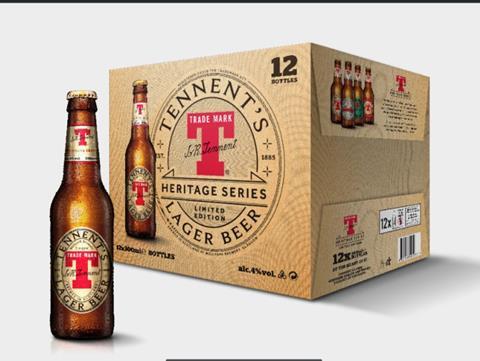 The event, in its sixth year, recognises the best in the flexographic printing process in the UK and Europe. Both of the winning packs from Tennent’s Lager were designed by Glasgow based agency D8, and produced by packaging specialists, DS Smith.

The ‘At the Heart of It’ pack was launched in support of 2017’s T in the Park Festival and won the title for Post Print Coated Line & Screen Gold in the Corrugated category. The second pack to win from Scotland’s top-selling beer was the ‘Tennent’s Heritage’ pack which won Gold in the Post Print Coated Process award, again in the corrugated category.

Tennent’s fought off stiff competition from well-known FMCG brands including Dettol, Tesco and Cadburys to win gold in the relevant categories.

Tennent’s limited edition Heritage Series pack was a 12x330ml bottle pack with designs that drew from the brand’s experience and expertise of brewing on the same site for almost 500 years. The labels themselves took inspiration from original bottles, during era when Tennent’s was the world’s largest exporter of beer.

Tennent’s is a fabric brand in Scottish society, so the packaging was instantly recognisable to consumers and 200,000 bottles of the Heritage Series were sold, the most successful of Tennent’s limited edition packs.

The Heritage Pack was launched to consumers in February 2017 through an integrated digital and PR marketing campaign. Tennent’s partnered with the brewing archive at the University of Glasgow to identify some of the rarest items of branded memorabilia. Consumers were then tasked with the challenge to find some of these items for the chance to win a free pack. The campaign generated widespread awareness of the pack through both PR and social media channels.