Tape based on industrial plastic waste released by Monta 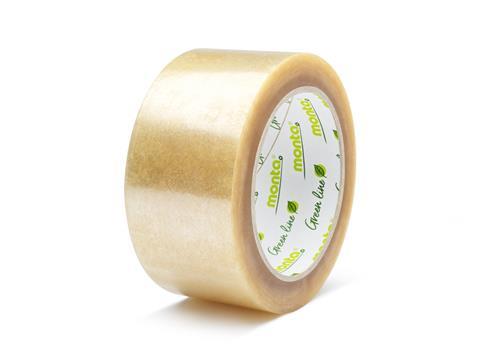 The new tape, Monta reTec 831, has a natural rubber adhesive and was designed to seal medium-heavy to heavy boxes. The film backing is made entirely of European post-industrial recyclate (PIR).

The company says that, as a result of this, the raw materials utilized have a carbon footprint that is 33% lower than conventional BOPP plastic adhesive tape.

Monta’s solution aims to give new life to polypropylene waste that might have been discarded previously.

At the film manufacturer’s facility, the waste is processed into post-industrial recycled polypropylene and utilized as a carrier for the monta reTec 831 adhesive tape.

Monta then coats this carrier with a natural rubber adhesive, which it says meets the technical requirements even for difficult surfaces or extreme environments, such as in deep-freeze areas.

When it comes to disposal, the company says that well-known paper and cardboard manufacturers, as well as recycling service providers, have confirmed to it that adhesive tapes such as monta reTec 831 are completely detached from cardboard, and do not disrupt the cardboard recycling process.

As of last month, Monta has been compensating CO2 emissions for all its Greenline adhesive tapes by supporting recognised climate protection projects that are accredited to international standards.