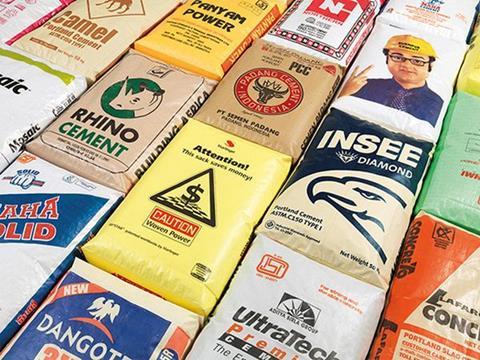 Life cycle phases of the cement sacks under study

For the life cycle assessment, the CML (Centrum voor Milieuwetenschappen at Leiden University, NL) impact assessment methodology framework was selected. The impact categories used in this study represent internationally accepted LCIA indicators (see Table 2). One ton of cement of average quality was taken as functional unit for the study. All primary and secondary data were collected specific to the countries under study. Where country specific data were unavailable, proxy data were used. Geographical representativeness is considered to be good. All primary data were collected or assumed for the year 2013.

The life cycle phases of the paper sacks, sewn woven polypropylene sacks, and welded woven AD*STAR sacks were defined as:

Production of sacks including the transport of raw materials to the production plant;

Transport of sacks to the cement plant (purchaser);

Use phase of sacks – also includes sack breakage and other losses in the entire logistics chain (including a specified recovery rate of cement at the plant and during transport), as well as production of cement to compensate for losses.

The cement datasets including all upstream environmental burdens were regionalised for Chinese and Saudi Arabian conditions.

End-of-life of sacks – final treatment of cement sacks. Analysis based on twenty 50 kg sacks needed for the packaging of one metric ton of cement, plus reproduction of broken sacks during filling. Net flows, e.g. emissions from uncontrolled incineration are also considered.

End-of-Life Credits – electricity and thermal energy production by means of incineration, substitution potentials resulting from the net flow of recyclable materials in the end of life of cement sacks. The end-of-life credits were adapted to the regional situation in order to represent realistic conditions.

Energy supply – the electricity grid mixes used in the production phase were regionalized according to the energy supply situation in China and Saudi Arabia.

The term breakage rate refers to the percentage of cement lost due to sack breakage in the entire life cycle of the respective sacks. The study showed that the low breakage rates in the course of the use phase are a decisive factor for the positive results of AD*STAR sacks.  As no reliable data were available from official sources, and in-depth product knowledge is needed for the determination of an applicable breakage rate for the different types and qualities of sacks during their entire life cycle, the study included interviews with experts from the local packaging and cement industries in China and Saudi Arabia.

The study applies the breakage rates considering that 90 per cent of the cement lost at the plant, as well as 20 per cent (Saudi Arabia) and 50 per cent (China) lost during transport and handling is recovered.  Regional differences of the AD*STAR sacks between Saudi Arabia and China are considered in the study with a number of factors, of which the regionalisation of the cement datasets, the electricity grid mix, upstream supply chain of PP, and the end-of life scenarios represent the most important.

For the production of the AD*STAR sacks analysed in the study, 100 per cent virgin material was used both in China and Saudi Arabia. Due to the special production process AD*STAR sacks are extremely robust despite their very low weight which also accounts for raw material savings during production. Because of the strength and resistance of AD*STAR sacks the cement losses caused by sack breakage and other losses are below 1 per cent in the entire use phase, while for paper sacks and sewn woven sacks the cement losses lie between 2.3 per cent and 4.4 per cent. These comparatively high rates are caused by the rough handling and low automatization in the logistic chains, especially in China. In many cases sacks are loaded, unloaded and stacked by hand multiple times until reaching the final destination. If the more robust AD*STAR sacks are used, less cement is lost and must be replaced, and less packaging is needed. Consequently, less greenhouse gases are produced.

In China, the world’s biggest cement producer, around 20 billion sewn cement sacks made of polypropylene tape fabric with recycled content are produced per year. In the study, sewn coated polypropylene sacks made of 50 per cent virgin material mixed with 50 per cent recycled material, and sacks made of 100 per cent recycled material were analysed because these are currently the most widely used sack types for packaging cement in China. The sacks have an extremely thin coating and are sometimes partially not coated, which reduces their shelf life. Together with non-existent coating, the sewn top and bottom seams account for increased cement losses during the entire transport chain.

The study concludes that AD*STAR sacks produced in China create lower environmental burdens in each impact category than the sewn sacks made of polypropylene with shares of recycled content. The latter show significantly higher impacts for ozone depletion, blue water consumption, land occupation and primary energy from renewable resources than AD*STAR sacks.

Regarding the global warming potential, the environmental impact during the use phase of the sacks is strongly dependent on the breakage rate. With breakage rates of up to 4.4 per cent the sewn polypropylene sacks with recycled content have a substantially higher environmental impact than AD*STAR sacks. More cement is lost during the use phase and has to be compensated by additional production.  AD*STAR sacks, in turn, are extremely robust due to the special production process and have realistic breakage rates below 1 per cent in their entire life cycle.

The sensitivity analysis of the breakage rates during the use phase showed that the global warming potential of both types of sewn polypropylene sacks would still be higher even if they had the same breakage rate as AD*STAR sacks.

Changing over to AD*STAR sacks would not only reduce CO2 emissions caused during production and thus relieve the environment; it would also contribute to the automatization of the entire cement filling and transporting chain. Currently, the manufacture and handling of the sewn woven PP sacks involves a lot of manual activities – starting with the sewing of the sacks in the production phase and the resulting size differences that cause problems on automatic filling lines, from putting them onto the spout during the cement filling process, to stacking, storing and transporting. Considering the current investments in modernizing the Chinese cement sector, the use of AD*STAR sacks which are produced automatically on sack conversion lines and allow fully automated handling of the packaged cement would seem a prudent step.

In Saudi Arabia, one of the biggest producers and exporters of plastic granulates worldwide, paper and glue imported from Europe are used for the production of cement packaging. Mostly, two- and three-layer kraft paper cement sacks can be found on the market; these sack types were also used for analysis in the study The global warming potential of both AD*STAR sacks and paper sacks in Saudi Arabia is dominated by emissions during the use phase of the product, which is, as discussed before, strongly dependent on the breakage rate of the cement sacks.

Ozone depletion, eutrophication, blue water consumption, land occupation as well as renewable primary energy show higher values for the paper sacks in comparison to AD*STAR sacks. Only the non-renewable primary energy demand shows lower potentials for paper sacks than for AD*STAR sacks. This is because the polypropylene used for the production of AD*STAR sacks represents a non-renewable resource, whereas kraft paper that serves as input for the paper sacks is based on renewable resources.  For Saudi Arabia, switching over to the more robust AD*STAR sacks would not only prevent the loss of countless tons of cement caused by sack rupture, but also greatly reduce raw material input for sack production and avoid long transport routes. In addition, the entire value created by both raw material and sack production would remain within the country.

The study was reviewed by an independent review panel, consisting of representatives from the internationally operating German inspection company Dekra, which held the chairmanship of the panel, as well as Lafarge France and Canada, Dr. Werner Environment & Development from Switzerland, and the Austrian trading company Sack Agency.  “With this comparative life cycle assessment on cement sacks Starlinger & Co. Ges.m.b.H. has presented a carefully researched and detailed study in accordance with the standards EN ISO 14040 and EN ISO 14044. In the course of the critical review the life cycle analysis experts of the review panel have surveyed and discussed the study and the data and stipulations it is based upon in depth with the authors of the life cycle analysis. Based on this comprehensive examination of the study I consider its results and conclusions sound“, said Dr. Frank Werner, Dr. Werner Environment & Development, Zurich.