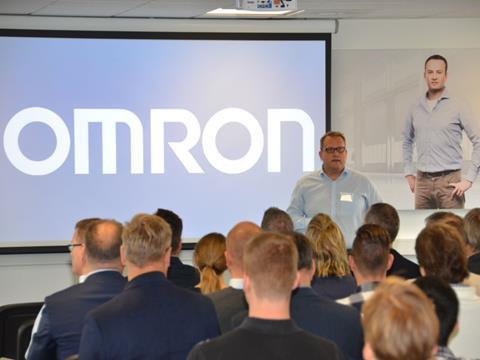 The Nordic Automation Center enables Omron to support its role as leader in technology and automation. Focusing on the company’s core competence of ‘Machine Automation’, the new center will help development of new technologies, products, and solutions. It provides a community hub for Omron and customers to share knowledge, and test and demonstrate the latest robotics innovations.

Omron opened its new Nordic Automation Center in Malmö, Sweden on 26 October 2017 with a day of special activities aimed at illustrating how the Center can act as a community hub for testing and knowledge sharing. The facility gives customers from Sweden, Denmark, Norway, and Finland access to engineering and technical resources in one centralized location. The occasion attracted a full house of almost 80 guests. The opening day began with a welcome speech by Håkan Nordkvist, Omron’s Nordic CEO, who explained the idea behind the NAC.

“As part of our i-Automation strategy, the NAC helps manufacturers prepare for the ‘digital factory,” says Håkan Nordkvist. “The facility provides a dedicated automation test and demonstration facility for the region’s customers. It forms a hub for community activities and we were delighted to see so much support from everyone who attended the opening. We even had to close registration early due to the event’s popularity. However, all our Nordic customers and partners will have plenty of opportunity to participate in future events.”

There were several speakers during the day. Among them, Martin Brolin, Omron Sales Manager gave a presentation on human-machine interfaces. This tied in well to the next talk on artificial intelligence given by Anders Kofoed-Petersen. Professor Kofoed-Petersen holds a post of Deputy Director at the Alexandra Institute (Denmark) and is Professor of Artificial Intelligence at the Norwegian University of Science and Technology (NTNU) in Trondheim. His talk stimulated many questions and was well received with comments including “he made AI very tangible”.

Roger Merkel, Omron Nordic Technical Manager then introduced the topic of ‘flexible production’ which was followed by a demonstration of robotic cells with a mobile robot moving between them. Other demos featured server systems, Sysmac, and a novel vibration suppression demo. This controls the robot’s motion to a high degree, as illustrated by moving a glass filled with water and bringing it to a sudden stop, without spilling a drop.

“I found the day very informative and entertaining,” says Oscar Molin, Sales/Electrical Engineer, PMA AB. “It was a very useful illustration of what the center can offer and how we can all utilize its facilities as a stage for testing and interaction. Being able to share and test ideas before implementing them in our solutions will be invaluable.”

“Our demos showed the NAC’s flexibility, with just a few examples of how it can be utilized by customers,” says Håkan Nordkvist. “The attendance at our grand opening shows that our customers see the value of the NAC and are looking forward to discovering its potential for themselves. In fact, we already had some discussions with customers on starting new projects based on what we showed on the day.”