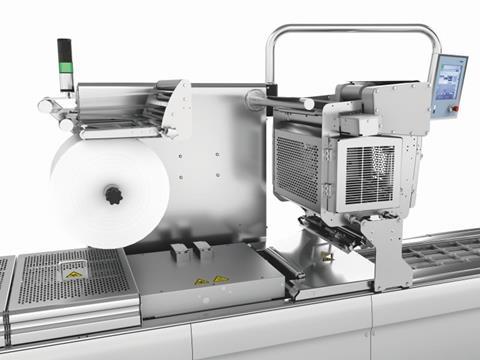 When the new generation of direct web printers was developed, there was a particular focus on meeting the latest hygiene and safety standards. As with the machines of the previous generation, the new direct web printers are based on a stainless steel and anodised aluminium construction. All exposed edges are chamfered and dead space has been systematically avoided. This means that liquid can easily drain away during cleaning.

Product improvementsThe innovations include hygiene cylinders with stainless steel connections on the film brake and hybrid cables for all connections to the packaging machine. The cover plates are specially designed for use in the food sec-tor and are perforated for ease of cleaning. Since security against loss of product has a high priority in the medical and pharmaceutical sectors, the DP 230 direct web printers for these industries are supplied with sol-id cover plates and plexiglass windows.MULTIVAC currently differentiates between two models: the DP 210 is equipped with an x-axis propulsion indexer, which enables the printer to move at right angles to the film running direction, so that multiple packs in a pack row can be printed. The DP 230 on the other hand is equipped with an x-axis and y-axis propulsion indexer. This means that the printer can move not only at right angles to the film running direction but also in the film running direction itself, enabling all the packs of a particular format to be printed. Thermal transfer and thermal inkjet printers are used as the printing technology.

The models are available in each version for cut-off lengths up to 400 mm and 900 mm. This means that the direct web printers are ideally de-signed for each film width and for all the available formats on the ther-moforming packaging machine. State-of-the-art servo motors ensure that maximum speed and printing accuracy are achieved.

Compact designThe compact design and user-friendliness of both series also offer sig-nificant benefits. Since the direct web printers are fitted above the seal-ing station before the control cabinet, the loading area remains com-pletely free. In the case of the larger thermoforming packaging machines from the R 1xx series onwards, both the DP 210 and DP 230 can be equipped as an option with a mobile holding device, so that they can easily be pushed to the side when changing the sealing die. This means that the sealing station is then easily accessible. When the machine is to be put back into operation, the direct web printer is simply pushed over the safety guard again, and the loading area is once more completely free.

In order that the direct web printer has a high degree of user-friendliness, MULTIVAC has equipped the printer mounting with a quick-changing device, so that it can be dismantled easily when changing the thermal printhead for example. All removable covers are provided with ergonomically arranged handles, which enable the covers to be handled easily from the operating side.