Is the Commission Planning to Ignore its own SUP Impact Assessment? 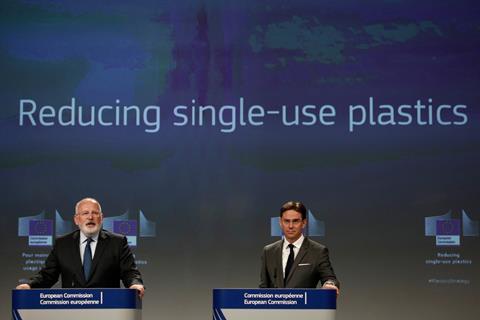 The European Commission has recently been talking up the Single Use Plastic (SUP) proposal whose tenets include banning certain plastic items. However, it has come to light that the Commission’s own Regulatory Scrutiny Board impact assessment of the report (which was revised following the negative assessment which greeted the previous draft) still raises questions over the coherence and evidential basis of the policy.

At the Packaging Chain Forum meeting in Brussels on 17 July, Sarah Nelen (DG Environment at the European Commission and lead in SUP proposal) addressed the SUP proposal, stating that Commission recognises the EU needs to take its responsibility to lead the global reduction of marine litter. The policy, according to Nelen, is not against plastics but prioritises promoting reuse systems that keep the materials in use for longer. Meanwhile, the proposed SUP legislation focusses on billions of units because they do more damage than the total weight of plastics leaking into the environment according to impact assessments.

However, the Commission’s second Impact Assessment (published without fanfare in April 2018) seems to suggest that a number of the basic principles require substantiation. Under an assessment of ‘positive with reservations’, it makes the following observations:

(1) The revised report still does not substantiate where and why the existing legislation falls short of addressing the identified problem drivers, especially for legislation that is not implemented yet or is currently being reviewed.

For single-use plastics, the analysis of the current policy framework (section 2.4) should clarify to what extent plastics end up in the oceans as a result of a lack of ambition of current legislation or because of weak implementation. It should also demonstrate that introducing measures to reduce the occurrence of each of the 10 most found single-use plastics is more effective and/or efficient than strengthening the existing legislation or its implementation.

(2) The case for taking action at EU-level on marine litter has been reinforced in the revised report. However, some of the arguments could be further strengthened. Besides cross-border protection of the environment, the revised report cites market fragmentation as the legitimation to introduce Europe-wide measures. However, it does not prove that fragmentation indeed poses a problem either for the market or for addressing marine litter.

(3) The report discusses the harmful effects of the 10 most frequently found single-use plastics as a group, while it foresees measures for each of the items individually. It should therefore show that each of these items is sufficiently harmful to warrant the proposed measures. This is particularly relevant for those items that are found less frequently, as they represent only a small proportion of the macro plastics in the seas.

(4) A number of options address recycling of macro plastics, which does not directly tackle the main problem of plastics in the seas. While recycling improves the use of natural resources, it does not in itself reduce littering or increase the percentage of waste returned to ports. The report should re-assess the appropriateness of including such options.

The Regulatory Scrutiny Board published a negative assessment of an earlier draft of the report in March 2018, in which it questioned the robustness of the presented data:

The problem description should explain what problem the initiative wants to tackle: the mass of marine litter in the ocean, or the number of plastic items on the beach or in the ocean. Given its limited impact on the mass of marine litter, the report should clarify that the approach is meant to tackle the most hazardous marine litter, including a discussion of the harm done. Additionally, the report needs to convincingly demonstrate and motivate why the scope of the initiative has to be limited to the top 10 single use plastic items and lost or abandoned fishing gear. The report should demonstrate the relevance of the list of 10 items and that it is future proof, in particular in comparison to national and international initiatives. The report should check the consistency and qualify the robustness of the various figures on marine litter and plastic marine litter in the main report and the annexes. The analysis of impacts and comparison of options should reflect the revised problem analysis.

Packaging Europe showed the latest Impact Assessment to Graham Houlder, coordinator the CEFLEX project, a multi-stakeholder initiative working to increase the circularity and recycling of flexible plastics across Europe. When asked for his reaction, Houlder said:

“I certainly question if it is appropriate to start introducing bans for certain plastic items when the Commission’s own Impact Assessment still raises concerns around the consistency of data and insufficiently substantiated claims. It’s concerning that the Commission seems to be presenting the revised impact assessment externally as positive when it calls for further data and evidence.  Are they intending to ignore these concerns, many of which echo those raised by industry? As many of these items are already covered in the Circular Economy Legislation and still need to be transposed into national law, wouldn’t it be more appropriate to strengthen the focus on the implementation of the new collection and recycling policies before introducing new legislation in the same space? The Commission has rightly identified “Circularity” as the desired end goal for all materials and widely supported full value chain initiatives like CEFLEX clearly show how industry is working to deliver this this vision without the need to ban certain items.”

The new rules propose to introduce a plastic ban in certain products ‘where alternatives are readily available and affordable, single-use plastic products will be banned from the market.’ The ban will apply to plastic cotton buds, cutlery, plates, straws, drink stirrers and sticks for balloons which will all have to be made exclusively from more sustainable materials instead. Single-use drinks containers made with plastic will only be allowed on the market if their caps and lids remain attached.

It also introduces consumption reduction targets. Member States will have to reduce the use of plastic food containers and drinks cups. They can do so by setting national reduction targets, making alternative products available at the point of sale, or ensuring that single-use plastic products cannot be provided free of charge. Meanwhile, producers will be required to help cover the costs of waste management and clean-up, as well as awareness raising measures for food containers, packets and wrappers (such as for crisps and sweets), drinks containers and cups, tobacco products with filters (such as cigarette butts), wet wipes, balloons, and lightweight plastic bags. The industry will also be given incentives to develop less polluting alternatives for these products. Member States will be obliged to collect 90% of single-use plastic drinks bottles by 2025, for example through deposit refund schemes. The policy also includes labelling requirement and awareness-raising measures.

When the policy was announced, First Vice-President Frans Timmermans, responsible for sustainable development said: "This Commission promised to be big on the big issues and leave the rest to Member States. Plastic waste is undeniably a big issue and Europeans need to act together to tackle this problem, because plastic waste ends up in our air, our soil, our oceans, and in our food. Today's proposals will reduce single use plastics on our supermarket shelves through a range of measures. We will ban some of these items, and substitute them with cleaner alternatives so people can still use their favourite products."

Vice-President Jyrki Katainen, responsible for jobs, growth, investment and competitiveness, added: "Plastic can be fantastic, but we need to use it more responsibly. Single use plastics are not a smart economic or environmental choice, and today's proposals will help business and consumers to move towards sustainable alternatives. This is an opportunity for Europe to lead the way, creating products that the world will demand for decades to come, and extracting more economic value from our precious and limited resources. Our collection target for plastic bottles will also help to generate the necessary volumes for a thriving plastic recycling industry."